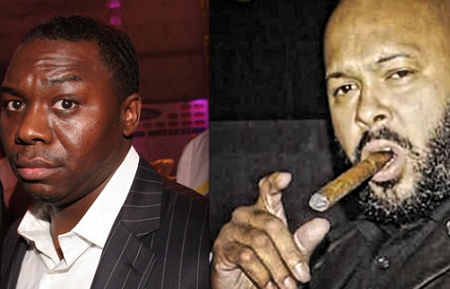 Hip-hop mogul and brow-raising businessman Marion “Suge” Knight (pictured right) was shot in the leg back in 2005 at an MTV Video Music Awards pre-party in Miami that musician Kanye West was hosting. At the time, police investigators did have their who-done-it suspicions, but never took anyone into custody for the shooting.

Now a federal informant has stepped forward to provide details about the attempted hit on Knight, which was allegedly ordered by former music executive and now convicted drug trafficker, James “Jimmy Henchman” Rosemond, acording to The Smoking Gun.

The informant, who has only been identified by the moniker “CW-3” (Confidential Witness 3), reportedly told authorities that he was hired by his longtime associate Rosemond to shoot Knight. The gunman alleged that Rosemond, who was coincidentally in attendance at the party, not only paid him $10,000 but handed him a gun to use for the shooting.

The motive for the shooting is still unknown.

Rosemond was recently sentenced to life in prison after being convicted on drug trafficking charges. The once CEO of Czar Entertainment, who once represented Salt-n-Pepa, The Game, Brandy, Sean Kingston and Akon, was also accused of orchestrating the 1994 gun-for-hire shooting of Tupac Shakur at the famed Quad Studios in New York City. Shakur was shot five times and lived. The 48-year-old recording mogul finally came clean to the feds about his involvement in the Tupac Quad Studios ambush as he was trying to carve out a cooperation deal that might have led to a reduced sentence, according to federal prosecutors.

After the Knight shooting, the informant, who claims he was a 10-year member of Rosemond’s drug operations, fled the party along with his backer. Knight received a leg injury that required surgery to remove the bullet and repair a broken bone.

CW-3, along with other Rosemond cohorts, are expected to also testify in the 2009 murder-for-hire Lowell Fletcher case scheduled to go to trial on November 18. Fletcher was a G-Unit member, who was convicted of attacking Rosemond’s 14-year-old son. According to government documents, a cooperating witness alleged that, according to Rosemond, he would not rest until “members of G-Unit were ‘carrying a coffin.’”

Besides the Fletcher murder, the witnesses will reportedly be drilled on the witness stand on other violent acts that were allegedly ordered by Rosemond. According to prosecutors, “Rosemond entrusted the Government’s witnesses to do his violent dirty work.”

As far as CW-3 and his being allegedly hired to shoot Knight, government lawyers contend that the incident “is crucial to show the strong and trusting relationship between CW-3 and Rosemond that ultimately led Rosemond to include CW-3 in his conspiracy to assault and kill members of G-Unit,” according to The Smoking Gun.