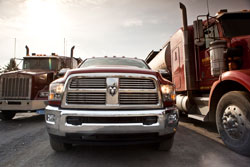 Sunday, Oct. 20, 2013 was not a typical day of worship for Bishop Allyson D. Nelson Abrams. For the first time in more than five years, she no longer stood in the pulpit as pastor of Zion Progress Baptist Church, near downtown Detroit, to preach one of her patented fiery sermons that the congregation had become accustom to hearing. Abrams officially stepped down as pastor on Friday, Oct. 18, after telling her congregation on the previous Sunday that she was married to a same-gender spouse.

In an exclusive interview with the Michigan Chronicle just two days before she resigned, Abrams told her story. “With some buzz going around about my same-sex marriage, I wanted my church to hear from me before members heard it from other sources; I had already talked with my deacons.” said Abrams. “I knew that it would eventually get to my congregation. So I stood in my pulpit on Sunday, Oct. 6 and openly talked about love, Christ, and that I was married and it was a same-gender marriage.”