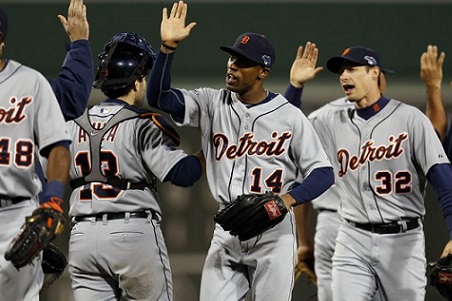 Starter Anibal Sanchez and relievers Al Alburquerque, Jose Veras, Drew Smyly and Joaquin Benoit combined to keep the Red Sox without a hit until Daniel Nava dumped a single to center off Benoit with one out in the bottom of the ninth.

Pinch-runner Quintin Berry stole second base after Stephen Drew had flied out to right field but rookie Xander Bogaerts hit a towering pop-out to shortstop Jose Iglesias to end it.

The five Detroit pitchers bamboozled Boston batters in registering a total of 17 strikeouts at Fenway Park.

Peralta, who rejoined the Tigers for the playoffs after serving a 50-game doping suspension, went 3-for-4 and drove in the game’s only run in the sixth inning with a soft single to center off Boston starter Jon Lester that scored Miguel Cabrera.

Sanchez, the AL earned run leader at 2.57, set the tone from the start striking out four Red Sox hitters in the first inning, a feat enabled when a third strike got past catcher Alex Avila for a wild pitch that allowed Shane Victorino to reach first.

The Venezuelan stymied the Red Sox with a tantalizing assortment of pitches, all of which he moved around the strike zone at varying speeds.

The worst jam he faced was of his own doing, as he walked three batters in Boston’s half of the sixth before striking out Drew to escape damage.

Sanchez struck out 12 and walked six and left the game after six innings and 116 pitches, only 66 of which were strikes.

“He gave us what we needed,” said Tigers manager Jim Leyland, who had left-handed relievers warming up and looked close to removing him. “He made a great pitch to Drew to get out of that inning. We stuck with him and he came through.”

The procession of relievers held Boston at bay, though Leyland could not relax as Detroit failed to cash in on their baserunners, stranding 12 in the game.

“A one-run lead and you almost feel like you’re behind in this ballpark,” the Detroit manager said with a nod to the short distance to the tall, left-field wall known as the Green Monster.

“I mean a walk and a home run over the Monster… you never feel comfortable.”

Many Boston players complained about strike calls from the home plate umpire but Red Sox manager John Farrell said that was not a factor.

“I can’t say that there was an issue with the umpiring because I would be taking away from the talent that this pitching staff has and they had good stuff,” said Farrell, a former major league pitcher and pitching coach.

Benoit struck out Mike Napoli looking for the first out in the ninth before Nava singled to end the no-hit suspense.

Two more outs for Detroit would have registered the first combined no-hitter ever thrown in Major League Baseball’s postseason.

The only previous postseason no-hitters were New York Yankee Don Larsen’s perfect game in the 1956 World Series against the Brooklyn Dodgers, and Roy Halladay’s no-hitter for the Philadelphia Phillies in the 2010 National League Division Series against Cincinnati.

Game Two of the series, which will produce the American League representative in the World Series, will be played on Sunday in Boston with Detroit’s Max Scherzer (21-3) taking the mound against Clay Buchholz (12-1).