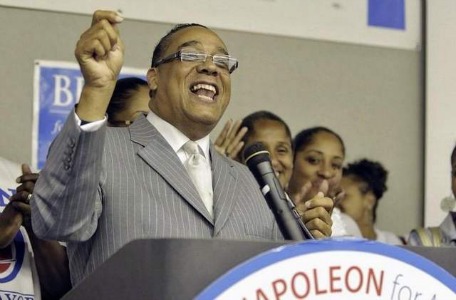 “Detroit has a long and proud history of growth, storied development, decline, rebirth and decline again,” said Napoleon. “The city’s physical, social and economic base that exists today is drastically diminished. Our inability as a city to compete in the marketplace has paralyzed efforts to provide residents with a good quality of life. Tonight, I presented a clear vision to reverse the trends, with a focus on stabilizing and revitalizing Detroit’s neighborhoods by utilizing a realistic economic growth strategy that will transform every neighborhood, one square mile at a time.”

Napoleon said that he designed his growth strategy to be implemented despite whether the city has an emergency manager or not.

“I have no intention of being a do-nothing mayor while waiting for an emergency manager to leave,” he said. “All of the items set forth in my plan can be done in the meantime, providing a clear and bold direction for Detroit’s future during emergency management, or after he is gone.”

The many viable historic and traditional neighborhoods that once boasted America’s highest rate of middle class single family home ownership, will again provide the base for rebuilding Detroit by revitalizing the housing and neighborhood business districts and beginning immediately to reestablish a quality living environment for current residents and future generations. Detroit’s Neighborhood Growth Strategy will partner with the community, business and philanthropic communities.

The following are eight major initiatives of Detroit’s Neighborhood Growth Strategy, crafted by Napoleon. These strategies are meant to strengthen Detroit’s economy by increasing job opportunities within the city and increasing the overall tax base.
Initiate the Five-Point Crime Plan, which Napoleon announced in September, to affirm Detroit as a safe city by reducing crime by at least 50 percent.
Implement the One Square Mile Initiative by placing approximately 130 police officers within the viable 139 square miles to stabilize the city, and reestablish a better quality of life for the city’s residents by focusing on each neighborhood’s issues at the micro level.
Develop and implement policy initiatives for a Blight Reduction Program, including holding banks responsible for their blighted property, and a moratorium on property purchases in the city that do not include a development plan with clear deadlines.
Develop seven high-focus anchor projects in each of the seven Council Districts that will target public and private resources, which will significantly increase property values, and create thousands of new jobs for Detroiters.
Build six Public Safety Service Centers with a private development partner in the Council Districts that will target commercial and retail investment and improve the functionality of the city of Detroit’s primary core service – public safety. (Council District 6 has an existing combined police, fire and EMS facility that was built by the city of Detroit and remains a very functional structure).
Construct nine stand-alone fire/EMS stations throughout the city with a private development partner.
Restructure the Detroit Housing Commission into the Detroit Neighborhood Partnership to create one governing and coordinating agency for neighborhood stabilization, revitalization and redevelopment functions, including planning, funding and implementing all neighborhood programs..
Target institutional, corporate and foundations to generate a $50 million funding source for the Detroit Neighborhood Partnership and development activities.
“Considering how long our neighborhoods have been in its current condition, Detroiters deserve much more than a promise to consolidate 14 city departments,” Napoleon said. “If we can direct billions of dollars of investment into a once-desolate downtown, we can do the same for our neighborhoods, or else, we will never transform this city.”

An action plan for the first 100 days in the mayoral office, Napoleon will concentrate on crime reduction, restoring city services and blight elimination. In the six-month period between the first 100 days in office and the time the emergency manager leaves Detroit, Napoleon will make concerted efforts to transition into Napoleon’s sustainability and economic growth initiatives in order to bring the city of Detroit out of bankruptcy.

The five-year picture for Detroit’s Neighborhood Growth Strategy will have significant economic value and create tens of thousands of jobs. The development value is projected to be $3.15 billion, creating an estimated 23,800 construction jobs and 28,000 permanent jobs. The projected tax revenue on the construction development will generate $42 million. The permanent revenue impact to the city of Detroit, in addition to existing tax revenue, is projected to be $16.1 million annually.

“Detroit’s families have been patiently waiting for livable, walkable and sustainable communities,” said Napoleon. “We will transform every neighborhood within Detroit’s 140 square miles – one square Mile at a time – by forming public-private partnerships to create jobs by attracting new investment; cleanup and revitalize our neighborhoods, streets, and business districts; and to improve the quality of life for our existing residents by drastically reducing crime and restoring city services. At the same time we will attract new people and businesses, and reconnect our neighborhoods to the central city.”

Napoleon added, “This emerging new Detroit will begin to have a profound impact on our ability to rebuild the city’s image and better connect Detroit’s growth to the tri-county area.”