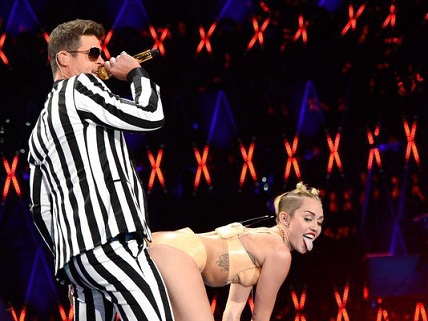 In the latest installment of “White People Who Want To Be Black,” Miley Cyrus hosted Saturday Night Live this weekend and made reference to her now infamous MTV Video Music Awards performance, twerking and white people — as if she isn’t “white people.”http://www.nbc.com/assets/video/widget/widget.html?vid=n41621

Initially Cyrus only twerked in videos. But once Black rappers from Juicy J to Kanye West (for whom White blondes are found and tickets were sold.

Wobble for what you want, indeed. But now Cyrus says she’s done with twerking. Why?“Now that white people are doing it, it seems kind of lame,” said Cyrus during her SNL monologue.Ableist insult aside —  because, really, Cyrus clearly doesn’t understand racism let alone ableism — the obvious “joke” is that she is the White girl who made twerking the mainstream Black dance du jour — similiar to the Harlem Shake [6]earlier this year.The sad part is, she still hasn’t realized that the joke is on her. The fact that New Orleans dance culture specifically is being appropriated is even more tragic. The city itself has experienced a purposeful white-washing post-Hurricane Katrina. And while the Lower 9th Ward is ignored and still hurting, “somewhere in America[7], Miley Cyrus is still twerking.”Just another day of White privilege.