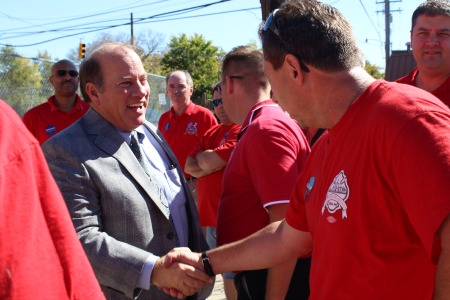 DETROIT, Michigan – The union that represents Detroit’s nearly 900 firefighters stood in support of Mike Duggan for Mayor Wednesday, calling him the one candidate who can fix the city’s broken fire department and restore reliable service to residents.

Standing in front of the decommissioned Ladder 19 station on Shoemaker near French Road – a decaying symbol of the department’s failed leadership – Detroit Firefighters Local 344 President Dan McNamara said he was impressed by Duggan’s commitment to improving conditions for his members. “Mike insisted on meeting with our fire fighters here at Ladder 19 to get an understanding of what is wrong with how the fire department is being run,” McNamara said.

“This building is a perfect example of the kind of management problems we need Mike Duggan to help us fix as our next Mayor so we can provide residents the level of service and protection they deserve.” The story of Ladder 19 is a troubling one. Despite its having been recently renovated, DFD brass decided to institute so-called “brown outs” – days or weeks during which the building would be inactive and unoccupied. As a result of its sitting vacant so often, Ladder 19 became a target for vandals and scrappers.

Eventually, the damage became so great that the station – previously the envy of the department – was beyond use and abandoned. The DFD also is facing a crisis-level shortage of fire trucks, ladders and personnel, McNamara said. These challenges put entire neighborhoods at risk, he added, because fire fighters often must travel from one end of the city to another to respond to a fire.

Although greatly impressed by his turnaround history, it was Duggan’s care for Local 344’s members that won him the union’s support.“At a time when Detroit’s future is literally being shaped amidst financial turmoil, Mike’s commitment to the security and safety of the public and our members was critical to him winning our endorsement,” said Local 344’s Secretary and Ex-Officio of the Political Action Committee, Teresa Sanderfer.

Duggan’s record over the years of meeting with Fire Fighters face to face in firehouses lent considerable credibility to his pledge of giving Detroit Fire Department members a role in shaping the department going forward, Sanderfer said. “Mike’s strong support for public employees and workers’ rights makes his election especially important at a time when the City’s premature bankruptcy filing has put the hard-earned benefits of our members and retirees at risk,” Sanderfer said.

Duggan said he was honored to have the support of both the city’s EMS workers and now its fire fighters. “Our fire fighters and EMS technicians are working in conditions that no first responder should have to,” Duggan said. “We need to provide them with proper equipment that is better maintained. We also need to address once and for all the problem of the vacant buildings that make up the majority of their fire runs and pose significant threats to their safety. These are the priorities I will begin to address five weeks from now.”