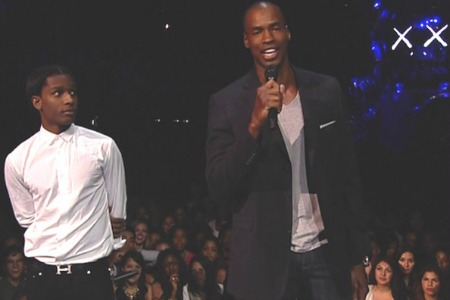 Without a doubt, one of the most memorable moments from this years’s MTV Video Music Awards was the awkward introduction of Macklemore and Ryan Lewis’ live performance by A$AP Rocky and openly gay NBA baller Jason Collins.

If you missed the appearance, the Harlem rapper looked visibly uncomfortable onstage and even pointed to Collins, to add extra emphasis, when he said “homosexuality.” The moment sparked rumors that the A$AP Mob leader may be homophobic, but during a recent interview with The Stashed he said those allegations are totally false.”I’m mad that my facial expressions was like that because I’m not homophobic at all, and that whole thing just came off real homophobic,” he explained. “I didn’t really notice it until I got home and saw it.”