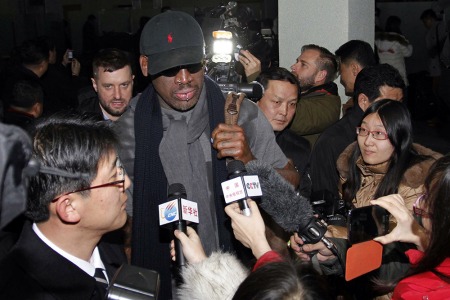 (CNN) — Former basketball star Dennis Rodman arrived in Pyongyang Tuesday on a five-day visit amid speculation he may try to negotiate the release of jailed U.S. citizen Kenneth Bae, China’s Xinhua news agency reported.
In Beijing, the gateway for flights to Pyongyang, Rodman told Reuters he was on another “basketball diplomacy tour” and would not be discussing the release of Bae.
“I’m not going to North Korea to discuss freeing Kenneth Bae,” Rodman told Reuters in a telephone interview before he left Beijing for Pyongyang. “I’ve come out here to see my friend (Kim) — and I want to talk about basketball,” he added.
Later pushing through a throng of journalists at Beijing airport, the 6 foot 7 inch (2.01 meter) former basketballer said: “I’m just trying to go over there to meet my friend Kim, the Marshal. Try to start a basketball league over there, something like that.”
However, he told the Huffington Post last week that he would likely broach the issue with North Korean leader Kim Jong Un.
“I gave (Kim Jong-un) a great indication of when I’m going to Beijing soon — that’s just a hop, skip and a jump from North Korea. So basically, you know, I’m pretty sure I’ll be talking to him soon,” Rodman told the Huffington Post.
Rodman reveals North Korea secrets Imprisoned American’s sister speaks out Rodman: Diplomat or naive?
“I will definitely ask for Kenneth Bae’s release,” he said. “I will say, ‘Marshal, why is this guy held hostage?’ I could try and soften it up in that way.”
“If the Marshal says, ‘Dennis, you know, do you want me to let him loose?’ and then if I actually got him loose — and I’m just saying this out the blue — I’d be the most powerful guy in the world.”
Rodman’s trip — which is being sponsored by Irish bookmaker Paddy Power — is the second to the hardline Communist state this year. In March, Rodman was pictured with Kim, an ardent basketball fan, laughing and eating while watching an all-star basketball match.
He was criticized over the trip which came at a time of escalating tension, with North Korea threatening missile strikes on the U.S., South Korea and Japan.
Rodman has previously made no secret about his desire to help Bae. He once tweeted that he wanted the 30-year-old unchallenged leader of North Korea to “do him a solid” by freeing him.
Bae was sentenced to 15 years hard labor in February after he was convicted of unspecified “hostile acts” against North Korea. The country’s state-run Korean Central News Agency said the Korean-American was arrested late last year after arriving as a tourist in Rason City, a northeastern port near the Chinese border.
North Korea last week canceled a “humanitarian mission” by Robert King, U.S. special envoy on North Korean human rights issues to Pyongyang, aimed at negotiating the release of Bae, citing annual military drills last week by the U.S. and South Korea.