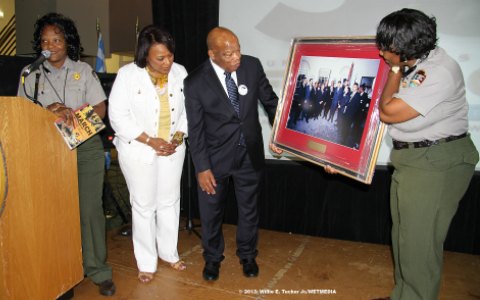 The 1963 March on Washington for Jobs and Freedom, a gathering of labor leaders, civil rights activists and a mass of people estimated at over 250,000, was one of the preeminent events in American history. In addition to contributing directly to the passage of the landmark Civil Rights Act of 1964 and Voting Rights Act of 1965, the march is also remembered for Dr. Martin Luther King’s “I Have a Dream” speech, widely considered the greatest piece of oratory ever delivered.

While most Americans know about the march, there remains a void in the collective consciousness about how it came to be and what really took place on August 28, 1963.

With the 50th anniversary on the horizon, the Atlanta Daily World spoke to some of the architects and attendees of the march that catalyzed the movement and changed history.

THE MAKING OF THE MARCH

Bernard Lafayette, director of American Friends Service Committee, former director of SNCC’s Alabama Voter Registration Project, and associate of Martin Luther King Jr.:
The March on Washington in 1963 was part of a total strategy in the movement to bring about social change. It was not simply another march or demonstration. It grew out of the Birmingham movement. It came about because of things that were already in motion.

One key component in the strategy for nonviolence is that in order to win or succeed in making major change, or in order for a revolution to succeed, there are certain components that are necessary. One is that no revolution has ever been successful without winning the sympathy, if not the active support, of the majority. The March on Washington was the part of the strategy to demonstrate that the majority of people in America were ready for change.

Xernona Clayton, wife of Jet Magazine editor Ed Clayton, Martin Luther King Jr.’s speechwriter and PR manager, and close friend and travel companion of Coretta Scott King:
SCLC, Martin Luther King’s movement, had just come out of a very, very stressful movement. The Birmingham movement took all of the energy and all of the planning and all of the manpower and everything. So Birmingham just sapped the energy of the SCLC in that neck of the woods.

A lot of people don’t realize that Martin Luther King did not call this march. This was a call from A. Philip Randolph, who called all the civil rights organizations and told them he had this idea and asked them to join. Some people didn’t but Martin Luther King felt that he could and should. He knew there would be reluctance from some people, but that was a massive call to try to get everybody to go to Washington.

Ralph Worrell, organizer District 65 Retail Wholesale Department Store Union and assistant to Cleveland Robinson, chairman and March on Washington organizer:
It was about six months, took about six months putting this thing together. A. Philip Randolph, he was a key figure that put this whole thing together; he and Bayard Rustin, who coordinated the march.

Clayton:
The planning was done independently and collectively, meaning there were some plans made here within the framework of the organization, SCLC, and the national planning was done by Mr. Bayard Rustin who did the legwork and worked out the mechanics of it all. That was done from Mr. A Philip Randolph’s office and then the plans were funneled down through all the civil rights organizations who were gonna participate.

Worrell:
One thing they discussed a lot during that period was jobs were leaving the United States and going overseas. So the main thing was to highlight that and bring jobs back to America and show the importance of the jobs needed here. That was the main focus: it was jobs, jobs, jobs, because they recognized that if you have jobs you could eliminate a lot of hunger and poverty and whatnot.

Lafayette:
There were some people who were reluctant to have the march because they didn’t want to have a poor showing. There were others who were fearful that the situation in Birmingham and the hostility that existed had riled people up to the point where they also were angry. These were black people, seeing what happened to their children and that kind of thing.

In fact some people said, ‘If we get up there and violence breaks out in the nation’s capitol, all these black folks up there, that’s gonna set the movement and the efforts that we’ve made back 50 years.’ So some people were very reluctant to going there. The thing that gave momentum in a very short period of time, like almost three weeks before this event took place, was the phone calls started coming in from different local community groups asking, ‘Where do we park our buses?’