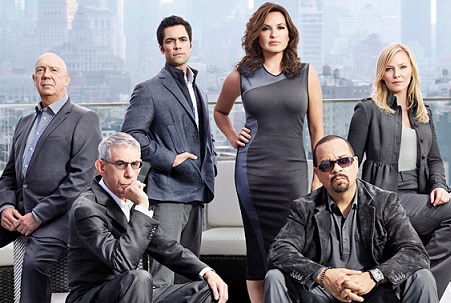 In an upcoming episode of Law & Order SVU, the popular series will conflate the stories of southern celebrity chef Paula Deen and slain 17-year-old Trayvon Martin — two headlines that captured the nation’s attention and exposed how deeply racism is embedded in the fabric of this country.

According to TV Guide, Cybill Shepard plays Jolene Castille, a southern celebrity chef who guns down an unarmed, hoodie-clad, Black teenager who she mistakenly accused of following her.

Executive Producer Warren Leight also confirmed that elements of New York’s ‘Stop & Frisk’ policies will be woven throughout the episode and that “tough questions” would be asked:

SVU infamously tackled the Chris Brown and Rihanna domestic violence controversy in a February episode that drew wide-spread criticism. And the upcoming Deen-Martin story-line is sparking passionate debate even before it airs.

‘When the script was published it became a litmus test for everybody here,’ Leight said. ‘It was really interesting to see people read that script and have different interpretations about who did what and whether or not they deserved prison for it. It was fascinating.’

This is not the first time that Trayvon Martin has been used as a storyline.

HBO’s The Newsroom[1] aired an episode earlier this month.

The Law & Order SVU episode is scheduled to be the third of the season, and according to Buzzfeed[2], is titled, “An American Tragedy.”