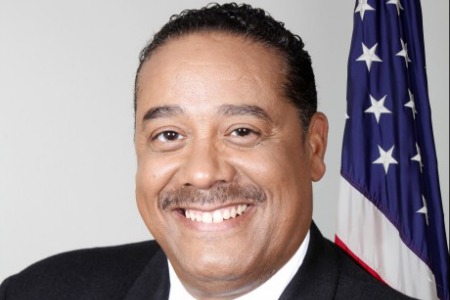 The Wayne County Board of Canvassers issued an unprecedented ruling this afternoon declaring victory for mayoral candidate and Wayne County Sheriff Benny Napoleon in the hotly contested Aug. 6 primary election. Napoleon, according to the board, finished first in the mayor’s race with his challenger and former Detroit Medical Center CEO Mike Duggan coming in second.

Initially the Detroit Department of Elections had declared Duggan winner of the election at 46 percent to Napoleon’s 30 percent. But now the political fortunes have turned and Napoleon, according to the election panel, netted 28, 391 votes or 41 percent while Duggan received 23,970 votes or 34 percent. Napoleon leading now sets the stage for a real election showdown even as it exposes problems with the Detroit Department of Elections. Napoleon alluded to that in a statement released this afternoon.

“This is no small margin of error. This is very troubling, and I believe it is cause for Detroit’s General Election to be overseen by the highest authority — either the Federal Elections Commission or the Department of Justice,” Napoleon said.

“Detroiters need to know their votes count and is not predicated on someone’s actions or inactions. We must protect our most sacred right at all costs.”

Meanwhile Duggan’s campaign manager Bryan Barnhill issued this statement. “We’re confident the State Elections Division will certify the results of the election properly and make certain that all votes are counted,” Barnhill said.