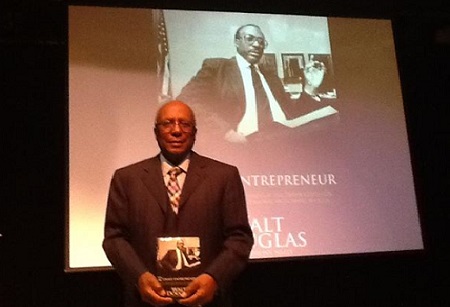 The making of a man like entrepreneur extraordinaire Walt Douglas like Detroit businessman/activist Walt Douglas is laden with extremes. From his humble roots in Hamlet, N.C., to his meteoric rise chairman of Avis Ford and later president of New Detroit Inc., Douglas’ journey from his small town beginnings to becoming an integral force in Detroit’s political and economic development is told in his just released autobiography , The Activist Entrepreneur: What I Learned About Business at the Urban Coalition And My Proven Keys to Personal and Career Success.

On Tuesday, Aug. 6 Douglas regaled a captivated audience with one fascinating account after another of his business and personal accomplishments during a much anticipated book signing at the Charles Wight Museum of African American History. Douglas discussed his and his family’s extraordinary commitment to education and personal development, sharing a poignant but all too familiar story regarding the intellectual competencies and diminished expectations for African Americans in general. Recalling an admonition from a high school teacher who told Douglas’ parents “You need to find something for Walter to do because he is not college material. He will never make it in college,” he shared the incident with the kind of satisfaction one is privy to when defying the naysayers. And of course he was more determined than ever to prove the misguided educator wrong.

So after his ascension to distinguished achievement during a 20-year stint at the IRS, his crucial role in establishing and guiding the nation’s largest urban coalition, New Detroit Inc., and ultimately ownership of one of the automotive industry’s leading car dealerships, Avis Ford, Douglas was well versed in the business and political ins-and-outs of Detroit. Moreover, he was even better equipped because of those experiences to lead others in understanding the “big picture” and making their respective marks in pursuit of the American Dream.

But it his riveting account of terse and at times notorious negotiations with his infamous adversary Sid McNiece of Avis who later founded Avis Rent a Car, Douglas turned to his inner black man, an removed the gloves. After several particularly contentious comments from McNeice, Douglas writes:

“My true personality was now in full in play and I was no longer Mr.Nice Guy,” he admits. “… before I knew it I was standing over him … determined that my next move was going to be physical. ‘Sid, I’m sick of you.’ Adding a few choice four-letter words for full effect as I told him how pathetic his bullying tactics were. I finished my remarks by inviting him to stand so I could know him on his ass. He did not move, but I knew I had frightened him. My actions changed his demeanor.” In a predictable turn-o- events, things went more smoothly at the closing two days later.

But the take away from the saga of the Avis Ford negotiation and eventual acquisition is more a lesson in practicing what you preach for Douglas who for those 8 years he was with New Detroit and beyond, advised countless budding entrepreneurs to stay the course. His conviction that African Americans with the skills, the experience and the means to own businesses and create jobs should, was reaffirmed and the Brink Award-winning auto dealer’s message had been validated.

Douglas also embarked on some discussion about the impact of the 1967 Detroit Riots on his career and family, calling it instead the “Detroit Rebellion” and explaining to readers and audience members that the turmoil of the time was more a chaotic and ferocious release of frustration and pinned up emotion over the second-class treatment of black Detroiters. And here in the post Great Recession era, Douglas finds himself even more rooted in his pledge to extend his extensive business knowledge to other entrepreneurs and to share valuable lessons about strategic partnerships that bridge boundaries and produce profound change.

What many readers may find most remarkable about this story though of social ideals and business savvy is how intimately Douglas’ family has been involved in every step of his ground breaking journey. With two of his sons working in the business at Avis Ford, a daughter who is always close at hand, and his wife Retha at his side for 56 years, Douglas has devised a formula for continued personal enrichment of the sort that reshapes our world and enhances our lives.

When asked why a man who sells cars is writing a book, Douglas responds, “I have a story to tell … and I think anybody who picks up the book could be inspired by stories of some of the challenges I have had to overcome.”

Douglas’ long-time and close personal friend Edsel Ford may have put it best, “Now, as the economy reshaped our local and national landscape, I must say that Walter Douglas could not have chosen a more relevant time to share his life story. It testifies to the power of the entrepreneurial spirit when backed by hard work, discipline and faith.”

For more on The Activist Entrepreneur: What I Learned About Business at the Urban Coalition And My Proven Keys to Personal and Career Success please visit www.WaltDouglasonline.com