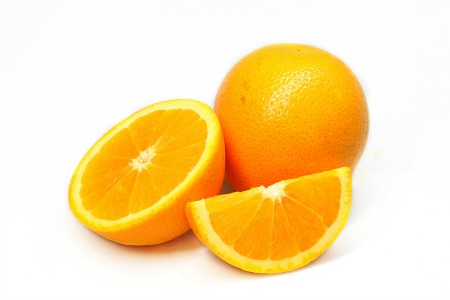 Staying away from sweet treats is a tough thing to do. Luckily, science may have a solution to this: Just smelling an orange could help your diet along.
Researchers at the Society for the Study of Ingestive Behavior presented two different experiments, one where women were asked to smell either oranges or chocolate before eating. In another study, women were shown images of food or non-food objects, before being provided a snack.
The difference? In the first experiment, women who were given the smell of fresh oranges ate 60 percent less chocolate, compared to how much they ate after smelling chocolate.
“It might be that the smell of fresh oranges reminded dieters to limit intake of a tempting and diet-forbidden snack,” researcher Nicola Buckland told NPR.
In the second experiment, dieters who were shown images of healthy food tended to eat less than dieters who were shown photos of non-food items.
Researchers imagine that the reminder of eating healthy is enough to make dieters eat just a bit less than they normally would, which means simply seeing or smelling healthy foods could be enough to cue healthy eating.
“When tempted by food, dieters should take a few moments to focus on the sensory properties of healthy food, such as the sight and smell of fruit or salad vegetables,” Buckland said in a press release.
Also, start keeping healthier snacks around your house and work desk, to serve as reminders for “dieters to limit their food intake.” Too bad our desks are laden with popcorn and chips.
This Smell’s Not Just For Diets!
Brazilian scientists had participants spend five minutes inhaling one of three substances: Sweet orange essential oil, tea tree oil, or plain old water. Participants then underwent a stressful test while having their vital signs measured. Those who sniffed orange oil were less anxious throughout the test, and the beneficial effects even lingered once the exam was over.
Curious About What Citrus Scents Can Do For You?
Try giving these aromas a sniff:
Grapefruit: Anecdotal evidence suggests that grapefruit aromas can curb depression and enhance memory. Or try taking a whiff before meals to control your appetite. Research from Japan’s Osaka University shows that the scent of grapefruit actually boosts metabolism and reduces food cravings.
Lemon: Prepping for a major meeting? Enhance your performance and your attitude by rubbing lemon balm inside your wrist. The mild lemon scent sends you to a positive place. In fact, a study at the UK’s Northumbria University found that exposure to lemon balm can improve cognitive performance and mood.
Mandarin: At the Mayo Clinic, massage therapists and acupuncturists augment therapies with the gentle scent of mandarin essential oil. Patients have reported reduced stress, better digestion and less nausea.