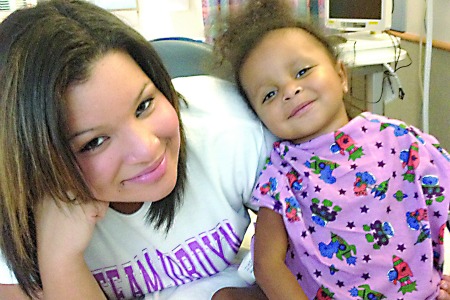 Jordyn Maddox of Delaware has end-stage kidney failure and is currently at the Children’s Hospital of Philadelphia.   Before Jordyn was born, doctors diagnosed her in-utero with Autosomal Recessive Polycystic Kidney Disease, a potentially deadly condition that causes low-functioning, cyst-filled kidneys. The doctors did not expect her to make it to birth. Jordyn was very sick when she was born and was not expected to live.  ”Once she was born, the doctors looked at her and said there was nothing they could do. We were passing her around, saying goodbye to her,” recalled her mother, Taylor Burden.  Jordyn was placed in the hospital’s neonatal intensive care unit where she spent three months fighting to get better. After she was released from the hospital, she made it to her first birthday before she needed serious medical intervention. Shortly after her first birthday, Jordyn had to be placed on peritoneal dialysis, a type of dialysis that uses the lining of the belly to filter the blood.  About a month ago, Jordyn was admitted to CHOP after she developed an infection from the peritoneal dialysis. She’s been undergoing hemodialysis at the hospital two and half hours a day, three-days a week, for almost a month. Jordyn is now on the extensive waiting list for a deceased donor.   ”Hemodialysis is the last thing that is going to maintain her levels before getting a transplant but it’s also very hard on kids, so it’s not her best option. A living donor is the best option for her,” said Burden, who has launched a movement to help Jordyn find a living organ donor candidate.   The website “http://teamjordyn.intuitwebsites.com”