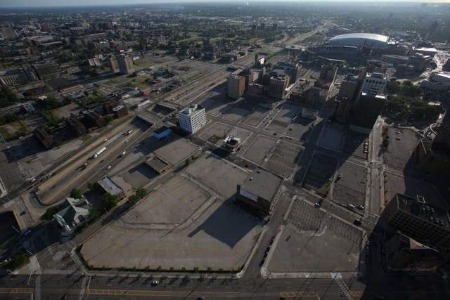 “This new entertainment district will be much more than a new arena for the Detroit Red Wings. This is a project that will help revitalize Detroit,” Snyder said. “This project creates another major destination point for residents and visitors alike that builds on prior investments along Woodward from Comerica Park and Ford Field to the new Whole Foods in Mid-Town. The Ilitch family organization is making an enormous investment in the city and state bond financing makes this project a true public-private partnership.”

Last month, Olympia Development of Michigan, an Ilitch-owned company, signed a memorandum of understanding with the Detroit Downtown Development Authority and Wayne County that provides a framework for the private and public financing of the Catalyst Development Project in the city.

The MSF approved the Catalyst Development Project for the Detroit Downtown Development Authority and Olympia Development of Michigan, LLC, and an inducement resolution for issuance of $450 million in private activity bonds to finance construction.

Plans for the new entertainment and commercial district call for a multipurpose events center that will be the home of the Detroit Red Wings. Construction of the arena is expected to create an estimated 2,900 direct construction jobs. With the related commercial and entertainment venues, the total direct construction jobs created by the project are estimated at 4,380. The project agreement requires at least half of the jobs created to be filled by Detroit residents.

The project includes acquisition of land, construction of the events center, the acquisition and installation of furnishings and equipment, and further development of the surrounding district.
The investment for the project is estimated at $650 million.

Olympia Development is expected to fund 56 percent of the project investment with public sources contributing 44 percent. Over the past decade, private funding has averaged 25 percent for comparable projects for major league sports facilities across the nation, according to Olympia Development testimony presented to the MSF.

“This project is appropriately named as it will have a catalytic effect on the city thanks to added commercial and residential offerings along with the arena and entertainment venue,” said Michael Finney, MSF Chair and president and chief executive officer of the Michigan Economic Development Corp. “This vital community development will provide thousands of jobs for city residents during construction and new fulltime jobs when the facilities are completed.”

Pure Michigan is a brand on the rise, representing business, talent and tourism initiatives across Michigan. These efforts are driven by the Michigan Economic Development Corporation, which serves as the state’s marketing arm and lead advocate for business growth, jobs and opportunity with a focus on helping grow Michigan’s economy.

For more on the MEDC and its initiatives, visit: MichiganAdvantage.org. For Michigan travel news, updates and information, visit michigan.org.