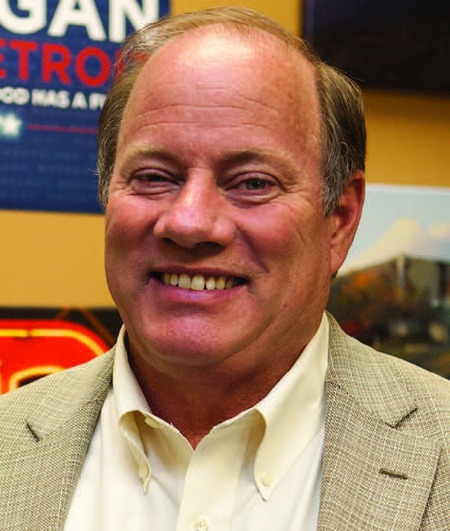 For more than three decades, the name Mike Duggan has been a fixture throughout Southeast Michigan. including Detroit and Wayne County. He is a former Wayne County prosecutor, and was the former president and CEO of the Detroit Medical Center for almost a decade. Some have called the University of Michigan Law School graduate perhaps this region’s most successful turnaround specialist. Now,he wants to turn around Detroit as its next mayor. Duggan stopped by the Michigan Chronicle office recently to discuss his mayoral vision and plans for city of Detroit. Donald James conducted this part of the interview.

MICHIGAN CHRONICLE: Detroit finds itself at perhaps its lowest point in the city’s 312-year history. Why do you want the job of mayor?

MIKE DUGGAN: I’ve worked in the city of Detroit every day for the last 32 years. For the last nine, I ran the Detroit Medical Center, the largest employer in the city. While DMC was growing, I saw that the city was falling apart. I thought the city needed a mayor that has successfully dealt with financial crisis. I have that ability to turn things around financially. As you look at Detroit today, everything starts with being able to manage its finances. We have to get stronger financially in order to add additional police officers and firefighters. I really love the city of Detroit and I love its people. I feel that I can help turn the city around as its next mayor.

MC: How would you reduce crime in the city?

MD: First of all, we need to cut police response time. We’ve been giving a lot of lip service to it, but have not executed it. We also still have officers in stations dispatching patrol cars. Kevyn Orr’s last report stated that we have more than 50 police officers filling out payroll. We must put every available police officer on the street and we must improve the efficiency of every officer that’s on the street. Also, one agency does not bring down crime. We need to get the whole system working together in a more concerted effort. We can bring crime down, but we must make better use of the resources that we have. It’s not all about getting more money, more people, more resources. A lot of it is about having better leadership.

MC: What’s your plan for creating jobs for Detroiters?

MC: Historically, write-in candidates for mayor in major American cities have not been successful. Why do you feel that your campaign will be successful?

MD: Write-in victories are very difficult. However, the optic scan system that Detroit uses is actually the easiest voting system in America to write in. The problem is that there are no instructions on the ballot to tell you how. The voter sees that blank box and he or she has no idea of why it’s there. Our challenge is that every single voter that we get will have to be educated before he or she sets foot in the voting booth. It’s tough, but we are optimistic.

MC: The city is currently under the control of emergency manager Kevyn Orr. Can you be an effective mayor for the people of Detroit with the limited power that he chooses to give?

MD; As long as the emergency manager is here, neither I nor anyone else in the city has any rights. So we shouldn’t be under any illusion about that. The question is, who can most effectively move the emergency manager out at the earliest date? I have 100 people working on a plan that will be released in a couple of weeks that shows how we transition out from an emergency manager, back to elected leadership. It is my intention, right after the November election, to go to the governor with the community and business leaders who have supported me and say to the governor that the city has an elected mayor with a strong turnaround history and a strong turnaround team and plan. I will say that it’s time to thank Kevyn Orr for his service and send him back to Washington, D.C.

MC: If the city files for bankruptcy, would that drastically alter your plans as mayor? (Note: This question was asked just a few hours before the city actually filed for bankruptcy.)

MD: Yes, it will. But what it will change is this. As the law is structured now, it’s very likely that the emergency manager will be running the city under the supervision of a bankruptcy judge. If I get elected I’m going to attempt to persuade the governor, or the bankruptcy judge, to move the emergency manager out and replace the emergency manager with me. I believe that if we are in bankruptcy, it’s all that more important that the mayor is in charge. I hope that we won’t go into bankruptcy…I don’t think that it’s necessary, but if we are in bankruptcy when I’m elected, I’m going to do all that I can to ask the judge to make me responsible for operating the city so that we balance the interest of creditors with the long-term interest and needs of our citizens.

MC: There are those who have called you an outsider and a carpetbagger. Talk a little bit about your connection to Detroit, and how do you respond to what some opponents and their supporters are saying?

MD: I was born in Detroit. As a young boy, I lived on Stansbury near Franklin and Schaefer on the west side. My family moved to Livonia when I was about five, but I went to high school at Catholic Central in Detroit when it was on W. Outer Drive. I took the DSR bus to high school every day. I was in high school in Detroit when Coleman A. Young was elected mayor. My wife was born in Hutzel Hospital; she lived in Detroit until she was 13. My mom was a nurse at Receiving Hospital. My grandfather had a real estate office on Mack in Detroit. My great-grandmother was one of the first female entrepreneurs in this city. She owned a dry goods shop on Michigan Avenue in the 1880s. So my family is deeply rooted in this city.

I’ve worked every day in this city for the last 32 years. I’ve been honest with every group of voters that I’ve met with. I’ve asked them to see if my ties and my love for Detroit are sufficient enough for them to vote for me. I’ve asked them to see if I can identify with their problems in this city. I hope that on August 6, people will see that my ties and love for Detroit are sufficient enough and that I can identify with and fix the problems of Detroiters.