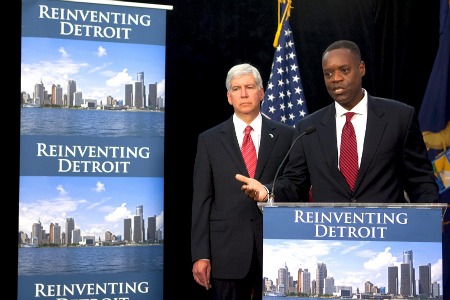 In doing so, Detroit became the largest municipality in U.S. history to file for bankruptcy, a move that has wide-ranging ramifications in the face of assurances that this is the best solution for the city.

At issue right now is the legitimacy of the bankruptcy filing by Orr who is being accused by pensioners and creditors of not negotiating in good faith in addressing the city’s $18 billion legacy debt.

Federal Judge Steven Rhodes, who has been selected to hear the bankruptcy case, will hold a hearing this week on the good faith negotiation claim. Orr and Snyder vehemently denied the accusations this week in my sit-down interview with both men following their announcement of the chapter 9 filing. They both insisted that the bankruptcy move is to salvage Detroit from its economic crisis.

“We’ve gotten here after 60 years and how many times, if you look back, could you say something should have been done,” Snyder said. “I just want to make it crystal clear that I’m going to take responsibility for this action. I think it’s too bad that it’s taken this long to fundamentally solve this problem. That’s why I take it seriously.

“Every single day that passed without doing this, Detroit would just go downhill even more. Let’s use the bankruptcy court mechanisms because there are no other options to address the debt question. And this is our chance to talk about better services for the citizens.”

This is a serious gamble for both Snyder and Orr, especially after e-mails this week surfaced showing that bankruptcy was the initial thought at the time of Orr’s hiring.

That made union leaders fire back saying there was a rush to bankruptcy instead of a good faith negotiations with labor and all other parties involved.

And because there is no precedent in this region, or anywhere else in the country, for this kind of massive financial restructuring, the consequences remain unknown, albeit a federal judge holds the answer to all of this.

“My concern is not the politics of this situation, not the public relations. My concern is for the 700,000 people here in the city,” Snyder fired back. “They are not getting what they deserve in terms of services. They are my customers. They hired me to do the job along with 9 million Michiganders. By giving them better results we can also say Detroit is going to be a great place again.”

At the very core of this proceeding now playing out in the public domain is the fate of retirees whose benefits could be slashed either in half or almost totally to satisfy creditors.

“If you are talking about the retiree portion of this proposal of unsecured creditors, it does represent the largest portion of that $11.9 billion,” Orr said. “The reality for retirees is only the unfunded portion of the liability. There are only two retirement funds — general services and police and fire. They have assets at their disposal.”

Orr said the issue is the unfunded portion of the retirement funds to deal with the bankruptcy.

“Rest assured that for the rest of 2013 it will be the status quo in the city and employees and retirees. We have to try to come up with a solution for those unfunded portions of the police and fire funds,” Orr explained. “There will be concessions that need to be made, but where is the alternative? They’ve already been made for decades. We are borrowing from the pension fund, deferring pension contributions.”

He said the city is where it is today “because in 2005 the city borrowed $1.5 billion that was supposed to correct the problem. Then in 2009 they were in default because they couldn’t make those payments. We pledged our casino revenue and kicked that can down the road.”

Orr said despite the opposition, no one is coming up with a solution because the hole is too deep.

Al Garrett, president of AFSCME Local 25, during a Monday news conference denied there was any financial crisis.

“It’s not a financial crisis. It’s a moral crisis,” Garrett said. “We thought there would be a good faith effort to negotiate.”

Orr said he is unfazed by the challenge.

“That’s why there is an eligibility requirement. We think very strongly there is only one conclusion: bankruptcy,” Orr said.

Can the federal government help as it did with the bailout of General Motors and Chrysler?

The White House only said it is monitoring the situation in Detroit and subsequent reports stated that Orr has been frustrated by Washington’s lack of involvement in this monumental action taken in Detroit last week.

Certainly, we do not expect Detroit to be given a blank check from the White House or a bailout as it did for General Motors and Chrysler. But some form of concrete and realistic help is needed from Washington to save a major American city that was at one time the pride of the world.

The White House cannot stand by and watch. It should be involved in this process no matter how it feels about a Republican administration in Lansing driving this economic motion in Detroit.

Every auditor general’s report for the last decade has shown that Detroit has been spending more than it can afford. And that did not make services to hard-pressed taxpayers and those invested in this city any better.

In the real world, Detroit’s sorry financial state did not start with the filing of bankruptcy. Bankruptcy was only a matter of time.

Could it have been avoided? A federal court decision in the wake of e-mails this week showing that there was concerted effort in the corridors of power to push bankruptcy with Orr’s appointment will decide whether this moment in history could have been addressed another way.

There is going to be a lot of pain because thousands of retirees who are not responsible for the actions of politicians and public officials charged with the public trust will have to pay the bitter price. All of their life’s financial worth embodied in their pension benefits stand to disappear by the stroke of a judge’s pen.

But the bitter lesson in this is the election of good faith leaders who will serve Detroit diligently and honestly. The city will do much better if it never returns to the types of administrations that have too often served this city.

“The retirees are going to take a cut in federal bankruptcy court. But how deep the cut is depends on how much money is left to pay creditors. This is like a giant chess game,” said former federal bankruptcy judge Ray Reynolds Graves.

If the creditors, some of whom are general obligation bond holders, are required to be paid 100 percent, are not satisfied with the cuts, they can point to the Detroit Institute of Arts, Belle Isle, the Charles H. Wright Museum of African American History and other city owned assets as possibly being for sale to satisfy the billions the city owes them.

And Judge Rhodes will decide this week if in fact Orr negotiated in good faith.

Bankole Thompson is editor of the Michigan Chronicle and the author of the forthcoming book “Rising From the Ashes: Engaging Detroit’s Future With Courage.” His book
“Obama and Black Loyalty,” published in 2010, follows his recent book, “Obama and Christian Loyalty” with an epilogue by Bob Weiner, former White House spokesman. Thompson is a political news analyst at WDET-101.9FM (NPR affiliate) and a member of the weekly “Obama Watch” Sunday evening roundtable on WLIB-1190AM New York and simulcast in New Jersey and Connecticut. E-mail bthompson@michronicle.com or visit his personal page at www.bankolethompson.com.