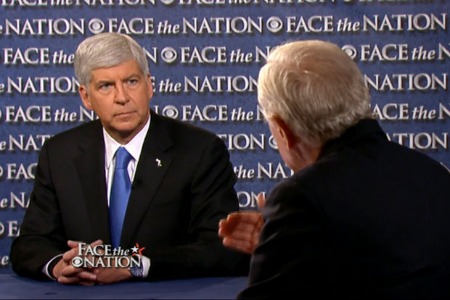 On Sunday, Governor Rick Snyder appeared on two national news shows standing by the decision for Detroit to declare bankruptcy, stating that it was a tough decision, but the right one.

“There were no other viable options,” Snyder said on NBC’s “Meet the Press.”

The city is dealing with the debt issue, he said, and the citizens of Detroit deserve better public services. If the city had not declared bankruptcy Detroit would have continued going downhill, he said. Public officials have been “kicking the can down the road for 60 years” while the problems festered, he said.

Police response time in Detroit is at almost an hour, and almost half of the city’s street lights don’t function. More than half its parks have been closed.

The city will continue to be protected by its police and fire departments, said Snyder on CBS’ “Face the Nation,” despite the bankruptcy, Detroit to continue its normal operations, “but I’ll tell you, normal operations are not good enough.”

City employees will continue to be paid and come to work, and Detroit residents will still get regular service, Snyder said.