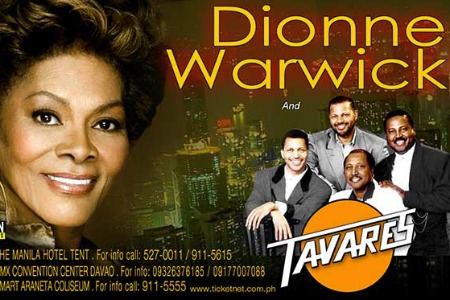 Singer Dionne Warwick, one of the best-selling acts of all time, is returning to the Philippines for another major concert series. She will perform in the capital city of Manila at the Manila Hotel Tent on July 20th, at the SMX Convention Center in Davao City on July 21st, and again on July 23rd in Manila at the Smart Araneta Coliseum.

She is being presented by Ovation Productions, who decided to bring her back after highly successful concert series in 2010, during which she performed to sold-out crowds in Manila and Cebu.

Warwick, who is the cousin of the late Whitney Houston, is known for her chart-topping hits such as Walk On By, Do You Know The Way To San Jose?, I Say A Little Prayer and I’ll Never Fall In Love Again.

For more details about the concert series, visit:
www.thephilippines.com/2013/07/dionne-warwick-concerts-philippines-manila-davao-city.html