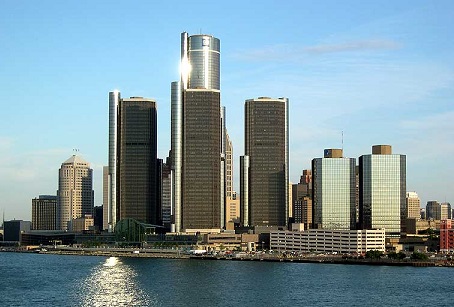 Detroit Emergency Manager Kevyn Orr today asked a federal judge to place Detroit in chapter 9 bankruptcy, a move that, if allowed, would make the city the largest municipality in the history of the United States to file for bankruptcy.

Michigan Gov. Rick Snyder, who appointed Orr, said bankruptcy is the only viable option to help Detroit residents at a time when the city is buried in $18 billion debt.

“The fiscal realities confronting Detroit have been ignored for too long. I’m making this tough decision so the people of Detroit will have the basic services they deserve and so we can start to put Detroit on a solid financial footing that will allow it to grow and prosper in the future,” Synder said. “This is a difficult step, but the only viable option to address a problem that has been six decades in the making. The simple fact is Detroit is in a financial crisis. The city is insolvent and has been borrowing money to pay its bills for nearly a decade. Bankruptcy is the only feasible option to fix the city’s finances and do what is right for the 700,000 people of Detroit.”

Sandy Baruah, president and CEO of the Detroit Regional Chamber is one of many leaders responding to the news of Detroit’s entry into unchartered waters.

“Bankruptcy is the bold step needed to finally address Detroit’s financial problems in a meaningful and sustainable way. While nobody welcomes the concept of bankruptcy, it is necessary to solve the long-term structural financial challenges of this historic city,” Baruah said. “This decision puts the city on a path to achieve its most essential function – providing Detroiters the services they deserve – and sets the stage for a growing, vibrant Detroit. The private sector is thriving and businesses continue to invest in Detroit. Addressing Detroit’s financial instability is the final barrier to robust growth.”

In an exclusive interview with the Chronicle, former federal bankruptcy judge Ray Reynolds Graves presented several scenarios of what could possibly happen in bankruptcy negotiations.

“The fate of retirees has been a major issue in chapter 9 whether or not the city cancels its retiree pension plan and force modification,”

Graves said. “In a chapter 11 (bankruptcy) the parties must negotiate that and there is a process in chapter 11 you must go through before you can make any changes in employee pension agreements that is not avail- able in chapter 9.”

What would happen to thou- sands of city retirees and current workers whose earnings could be canceled instantly to satisfy creditors has been a thorny issue in discussions about how to address the financial calamity facing Detroit.

Judge Graves said in chapter 9 the city can cancel the benefits and the court can’t do any- thing about it. Even though the Michigan Constitution protects pensions, the federal bankruptcy code supersedes.

“We get into this argument of federalism where state law has stated that as a matter of the right of the state it must protect its pensioners who are municipal employees. Does that sovereignty take precedence over any federal law? It’s to the contrary,” Graves said.

Because the U.S. Constitution speaks to a uniformed law on bankruptcy across the country, when the city of Stockton in California filed for chapter 9 bankruptcy, U.S. Bankruptcy Judge Christopher Klein did not stop the city from cancelling the pensions of its workers.

“I don’t know whether spiked pensions can be reeled back in. There are very complex and difficult questions of law that I can see out there on the horizon,” the Associated Press quoted Klein as saying in his ruling.

Graves said while there is no clear answer as to whether the state Constitution can prevent the elimination of retiree benefits, Orr can modify the pensions, meaning less money for hard-pressed workers.

“The retirees are going to take a cut in federal bankruptcy court. But how deep the cut is depends on how much money is left to pay creditors,” Graves said. “This is like a giant chess game.”

If the creditors, some of whom are general obligation bond holders required to be paid 100 percent, are not satisfied with the cuts then they can point to the Detroit Institute of Arts, Belle Isle, the Charles H. Wright Museum of African American History and other city owned assets as possibly being for sale to satisfy the billions the city owes them.

“He (Orr) knows one of the things he faces is that he has to negotiate in good faith. Where do you move from vigorous negotiation, to hardball negotiation to good faith negotiation? If not it will get dismissed,” Graves said.

Still, Graves said the bargaining chip of the creditors will be crucial because some of them are special revenue bond holders, different from general obligation bondholders who are expecting 100 percent payment or anything close to it.

For example, special revenue bond holders are paid out of a specific project or fund already set up in the agreement that revenues from either the casinos or other sources would first be paid to them.

“Here is my prediction and fear,” said Graves. “If in this chapter 9 process it becomes possible to sell the DIA, they will also sell Belle Isle and whatever they can do to get the bondholders close to a 100 percent. Belle Isle could be sold to a private developer and turned into a gated community.”

Interestingly, entities that are under an authority, like Cobo Convention Center and the Detroit Zoo, are not exposed to creditors, Graves said.

“Creditors are concerned with what the city owns that they can sell and rank them according to marketability,” he said. “The axe will fall on the retirees and active workers.”

One of the most important phases in this process is selecting a bankruptcy judge, and the chief judge for the U.S. Court of Appeals for the Sixth Circuit Alice M. Batchelder has the absolute discretion to make that decision without any consultation.

Judge Batchelder, a President Reagan appointee who started as a bankruptcy judge and was later promoted to the Sixth Circuit Court of Appeals by President George H.W. Bush Sr., could pick any bankruptcy judge in Kentucky, Tennessee, Ohio or a local judge from the U.S. District Court in Detroit to preside over the largest municipal bankrupt- cy in the nation’s history.

“It is her absolute discretion to choose whomever she wants and it’s a private decision,” Graves said. “She may consult with other African-American judges, Damon Keith, Guy Cole Jr., Bernice Donald, the first African American bankruptcy judge in the nation. But she doesn’t have to talk to any of them. It’s her prerogative.”

Because of her conservative bent, Judge Batchelder could also choose an extreme conservative judge from Kentucky to avoid anyone who is pro-labor “because cancellation of collective bargaining agreements is a key factor and you might want to pick a judge who is not shy about that.”

But the most recent bankruptcy cases have all been pre- sided over by local federal judges in California and in Jefferson County, Alabama.

But the Eastern District of Michigan already has six sitting bankruptcy judges, five of whom are in Detroit waiting including Judges Walter Shapero, Philip J. Shefferly, Marci B. Mclvor, Thomas J. Tucker and Steven W. Rhodes who is retiring at the end of the year.

In the case of the DIA there has been talk about the legality of sellin
g some of the artwork that was donated under strict agreement or contracts by the donors.

Judge Graves said it all de- pends on bankruptcy court.

“In chapter 9 all kinds of con- tracts get broken and breached to free the entities from burden. But the person who suffers the breach has the right to file a claim,” Graves said. “There is a lot of cultural life in Detroit that is respected around the world. I ran into someone in Madrid, mopping a floor, and when I said I was from Detroit he mentioned the Detroit Institute of Arts.”

Detroit leaders will have to come to terms with the impact a bankruptcy will have on the city especially if its jewels are sold to satisfy thirsty creditors.

The immediate impact could be felt on college educated young people and families who are moving back to Detroit in part because of its cultural institutions and other entities that afford them a vibrant civic life in the city.

What happens if those institutions are gone?

Bankole Thompson is the editor of the Michigan Chronicle. Email bthompson@michronicle. com.