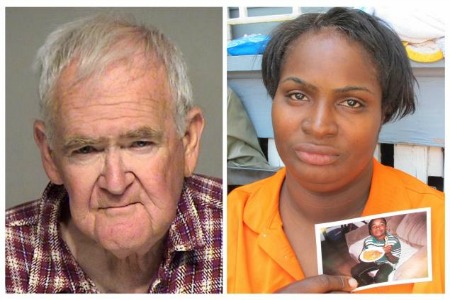 After approximately 2 hours of deliberation, a jury Wednesday found John Henry Spooner, 76, guilty of the May 31, 2012 first-degree intentional homicide of 13-year-old Darius Simmons.

The jury began hearing testimony Tuesday morning, was handed the case around 11:20 a.m. Wednesday and returned a verdict around 1:10 p.m.
As previously reported by NewsOne, Spooner suspected 13-year-old Simmons of stealing three shotguns from his home. Spooner confronted the child as he was taking out the trash.
Simmons mother, Patricia Larry, who yelled for Spooner to go away, said that her son’s murderer told the frightened boy to raise his hands and, when he complied, he shot him.
“He told Darius that he’s going to teach him not to steal,” she said during her testimony. “And he shot him.”
Spooner shot the child in the chest, and as he turned to run away, he fired a second shot that missed.
“I ran off the porch to my son,” she said. “I checked for a pulse. I checked both of his wrists. He didn’t have a pulse so I went to his neck, and it was very faint…. I pulled up his shirt and I could see that he had a bullet hole.”
Simmons took his last breath in his mother’s arms.
The murder, captured by Spooner’s own surveillance camera, was shown to the stunned jury and was posted online by Milwaukee’s Journal Sentinel.
“The best piece of evidence you’re going to see is the murder. You’re going to actually see what the murder looks like in this case,” prosecutor Mark Williams said.