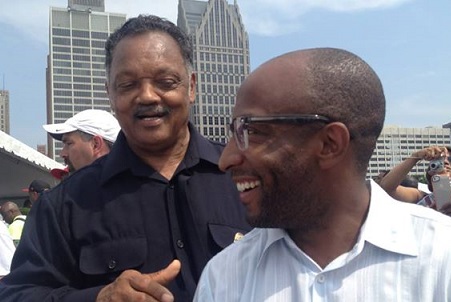 Jones Day, the law firm hired to handle Detroit’s financial restructuring, has billed the city for $1.4 million in fees for a mere six weeks of work. The fees were approved by emergency manager Kevyn Orr – who just resigned from Jones Day before taking the emergency manager position in March. Orr is expected to return to Jones Day once his contract with the state of Michigan is up.

“It is outrageous to think that a financially challenged city must contemplate busting union contracts, break work rules and change pension plans while it eagerly pays $1.4 million to the Jones Day law firm. It is insulting that the state appointed overseer wants us to join his crusade against pension recipients while he approves a $1.4 million payment to his former employer. The calls for financial responsibility are hallow and it seems the City of Detroit continues to pay for rap sheets when it needs recovery,” said David Alexander Bullock, Change Agent Consortium national spokesperson.

Last month Orr met with over 100 of Detroit’s creditors in an effort to get them to take pennies on the dollar. Today his restructuring team is meeting with the city employee pension and retiree groups. A bus tour of Detroit was scheduled for Wall Street creditors yesterday, but cancelled on Tuesday.