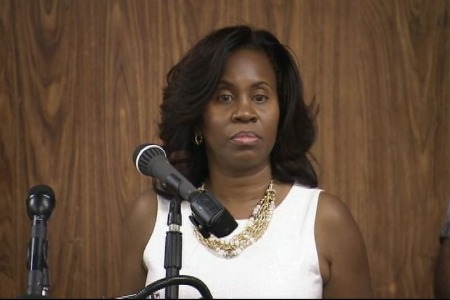 Facing criticisms from some political candidates, like Tom Barrow, who are questioning her stewardship of the Detroit election process, Detroit City Clerk Janice Winfrey, who has won repeated reelection, is vigorously defending the integrity of the voting process in Detroit.

Winfrey, speaking out on the electoral process of Michigan’s largest municipal government during an editorial meeting with the Michigan Chronicle, explained why this year’s election is not only crucial but underscores the essence of the ballot box.

To her critics, Winfrey said her record stands on its own and that voters will continue to decide on the work of their elected officials.

The clerk said that is because people need to know the outcome of their votes as expeditiously as possible.

During this election campaign, there have been a number of legal challenges, including Barrow’s contention that fellow candidate Mike Duggan wasn’t qualified to appear on the ballot. In addition, one of Winfrey’s own opponents for the position of city clerk, D. Etta Wilcoxon, recently won a ruling to have her name put back on the primary ballot.

Winfrey said challenges are the order of the day.

“Every race, every category has been challenged, to date, for this particular election,” she said, adding that it’s the right of candidates and voting citizens to do so.

According to the clerk, the fact that some council members will be elected by district this year won’t present any particular challenge to the Department of Elections because there have been candidates who’ve run in districts, such as state representatives, state senators and school boards.

On the other hand, the council by district elections are an educational piece for the electorate; and it’s important that voters know who the candidates are in their district and where their district falls.

Winfrey said while there has been legitimate discontent about the state of affairs in Detroit, voters need to come out and vote because those running for such offices as mayor, city council, city clerk and police commission are the ones who will affect the day-to-day living of the average citizen.

She said if voters want to retain their voice and for that voice to be heard publicly, it’s imperative to vote, in this election in particular.

Winfrey is hoping that the existence of an emergency manager is enough incentive for people to come out and vote to send the message that their vote matters.

But what on the clerk’s end will happen to motivate people to vote?

Satellite voting locations will be established again to make voting easier for those in distant location as was the case in the previous election.

She said it ensures that voters have two weeks outside of Election Day to come out and cast their votes easily by way of absentee voting in person.

Satellite voting, according to Winfrey, worked very well in the last election and she expects it to work very well this time, too.

Another push is the Election Connection newsletter that she sends out to every registered voter. She said that this year it will contain a map of the district in which a particular household resides, as well as a copy of the ballot that corresponds to that district and the location of their polling place.

Her office also sends out a notice about an upcoming election in the water bills of all Detroit residents. It’s a free mailing.

“Those ballots are kept,” she said. “They are not opened and counted until Election Day.”

“We need our voters to be prepared,” she said, adding that her last newsletter had an article about a scare that convicted felons wouldn’t be able to vote.

“Whatever the thought is of the day, we want to educate our voters to ensure that they are thoroughly prepared to vote on Election Day,” Winfrey said. “And we always include a piece on absentee voting because that’s very important for a number of our citizens.”

Another accomplishment she cited is that voters no longer have to provide a reason to vote absentee in person.

However, she believes that her signature accomplishment is the opening of the City Clerk Archives and Records Management Division. She said that’s pertinent to the office of city clerk given that she’s the keeper of all official documents, the archivist.

She said that when she first took office, those documents were scattered throughout the city.

“They were in abandoned buildings for two decades,” she said. “They were in the basement of City Hall. These documents lined the perimeter of the office of the city clerk.”

She also said it cost the city several hundreds of thousands of dollars in lawsuits, because it was tearing down buildings without notifying the owners.

“It took a year and a half for staff to go through and catalog and digitize those documents,” she said. “But we’ve done it and its in our archives facility.”

Some of these documents date back to the 1800, Winfrey said, adding that when an individual requests information, her office is able to pull it up within 24 hours.

Winfrey wants to get across to voters that it’s imperative that they vote.

“If you don’t like how things are going in city hall, If you’re not impressed by the fact that we are under the authority of an emergency manager, now is your time to come out and voice your opinion by voting,” she said.

If she had a “magic wand” regarding the election process overall, Winfrey would like for voters to ensure that their children understand the significance of the voting process and why voting is important.

Second, in a perfect world, individuals would automatically receive a voter ID card upon getting their driver’s licenses or upon graduation.

She’d also like to see school curricula that speaks more to the democratic process, what it means and its importance.

The biggest myth, she pointed out, is that people’s votes don’t matter.