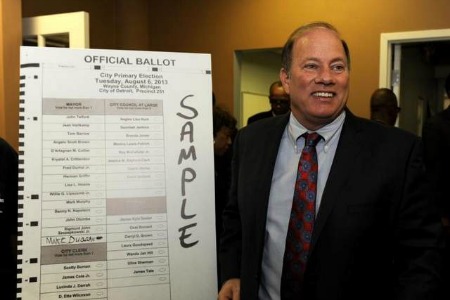 (See complete Poll Results, Page 2) Turnaround Detroit, a political action committee (PAC), commissioned Michigan-based pollster Mitchell Research and Communications to conduct a survey of likely Detroit voters   on the upcoming mayoral race.  The June 25-26th survey results reflect that among likely voters polled, there is strong support for Mike Duggan as a write-in candidate, and that he has a likely chance to be one of the top two vote getters in the August 6th primary election.

Turnaround Detroit was created earlier this year to support a leader that can turn Detroit around.  The next five weeks will be spent communicating to Detroiters the importance of voting for Mike Duggan – who has a proven record of success and 30 years of commitment to Detroit.  Duggan brings the unique combination of experience we need to rebuild our neighborhoods and take back our city from the state.

“Turnaround Detroit is committed to ensuring that every Detroit voter has their viable choice for mayor included. The recent poll results and comments received from voters are clear indications that Mike Duggan as a write-in candidate is among the choices they want,” said Turnaround Detroit committee co-chair Elizabeth “Betty” Brooks.