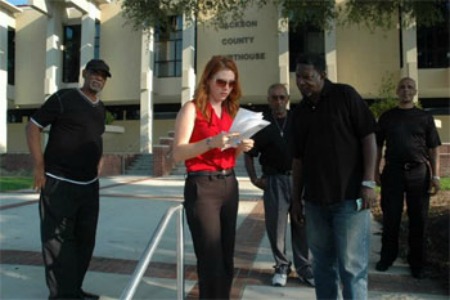 Behind the clear blue skies, white sandy beaches and hundreds of themes parks in the sunshine state of Florida that attract millions of people throughout the year, there is a dark ghostly shadow in Marianna, Florida.

While some children scream with excitement of the rides – and all the other amusement that can be found in a beautiful theme park; Richard Huntly, John Bonner, Johnny Gaddy and Arthur Huntley whom are a part of an organization called ” Black Boys At Dozier Reform School”, as children
they screamed with pain and agony from the beatings and abuse they received from the employers at Dozier. “I worked as a field crew, and my job was to take the garbage to the pit and I seen what appeared to be human fingers and bones that didn’t look like a cow or animal bones, one
of the boys said you better shut up if you want to live,” said Gaddy.

Richard Huntly fought back tears as he stood on the black side of the campus recalling those horrible and evil days at Dozier for the first time in over fifty years. One of the memories he recalled is having part of his toe cut off as a young boy working in the sugarcane fields. “I remember distinctly the beatings I got – and the beatings still haunts me to this day, Bonner says,” I get choked up inside just thinking about the – beatings.” Huntley face sadden as he recall getting beat because he couldn’t remember the face and name of one of the milk cows and which milk
stall the cow should go into.

According to the “Documentation of the Boot Hill Cemetery (8JA1860), At the Former Arthur G. Dozier School for Boys, Marianna, Florida., Interim Report Division of Historical Resources Permit No. (1112.032) The interim report provided a summary of archaeological and historical investigation
into the creation and initial identification of graves at the Boot Hill Cemetery in Marianna for Boys. As a result of their investigation, a record of 98 deaths was found in historical documents, including boys ages 6-18 years and two adult staff members. The deaths occurred between 1914-1973.

“Reports of children being brutally whipped and chained to the walls in irons as well as peonage cases was reported. After spending countless of hours researching peonage cases in the National Archives in Washington, D.C., I found many cases of peonage in Florida that were reported to the
Department of Justice by Mary Grace Quackenbos, special assistant U.S. attorney.” The state of Florida held men and children against their will to work in turpentine and lumber camps. Huntly, Bonner, Gaddy and Huntley said they worked like slaves in the fields, cutting and dragging logs,
planted vegetables and raising animals.

On July 23, 1963, sixteen blacks, seven of which were teenagers, was arrested for a sit in at a local lunch counter. Four of the juveniles, Samuel White, Audrey Nell Edwards, Joe Ann Anderson and Willie Carl Singleton were arrested. The four teens who became known as the “The St.
Augustine Four” spent a month in the county jail five months in a reform school in Marianna and Ocala for having attempted to be served a hamburger at the lunch counter.