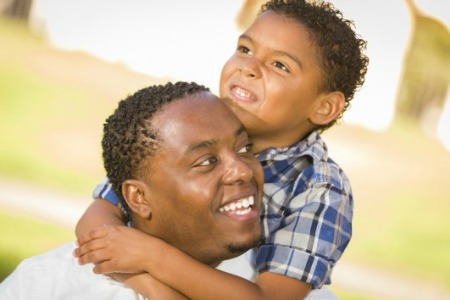 Dads who don’t live with their sons still can influence them away from risky behaviors, even if they reside in communities of high crime and poverty.

New research from the University of Michigan School of Public Health measured the impact of a federally funded program called Fathers and Sons, which strives to improve the parenting confidence and skills of nonresident fathers and prevent youth violent behaviors.

“The Fathers and Sons program improved nonresident African American fathers’ ability to talk with their sons about avoiding risky behaviors, such as early sexual initiation and violent behaviors during late childhood and preadolescence,” said Cleopatra Howard Caldwell, associate professor of health behavior and health education, who led the study that is featured in the July/August issue of Child Development.

“After improving fathers’ communication about risky behaviors, aggressive behaviors in their sons decreased,” Caldwell said. “An improvement in fathers’ parenting satisfaction increased their sons’ awareness of their father’s involvement in their lives. This connection was then linked to an increase in the sons’ intentions to avoid violence in the future.”

The program, funded with a grant from the Centers for Disease Control and Prevention, is a partnership involving U-M-SPH, the local health department and several community based organizations in Flint, Michigan.

More than three-quarters of the fathers that participated lived with their sons during early childhood and the majority had a current child support agreement. Most of the sons’ births were non-marital, and 56 percent of the fathers said they barely had or did not have enough money to get by.

The Fathers and Sons program particularly focuses on younger boys at ages when they are still attached to family and prior to them engaging in actual violent behaviors, Caldwell said.

“It is the child who is already engaging in very negative behaviors that most programs focus on, rather than on low risk youth,” she said. “We are one of few studies from an intervention perspective that has taken a strengths-based approach to involving nonresident fathers specifically in their sons’ lives to prevent youth violence in high risk communities.

“This type of research led us to believe that many nonresident African American fathers are viable, yet untapped resources for their sons.”