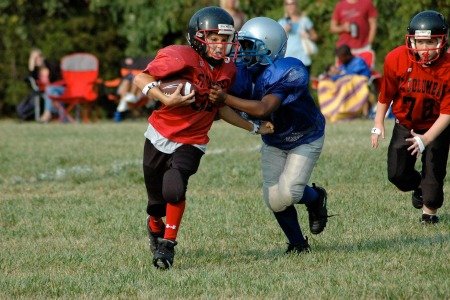 64% say they are afraid someone will hurt them while playing sports. 11% say
they were offered gifts or money to hurt another player.
The survey was commissioned by the non-profit arm of i9 Sports, the
nation’s first and fastest growing youth sports league franchise
with a local league in our area.
The local survey also reveals: 81% of those who have been hurt say their
teammates/friends have thought of them as tough, cool, a good player, or
even a hero when they played hurt and took one for the team.
42% of those hurt say they were called foul names if they sat out while
hurt – some by their own mom and dad! Names include; wuss, whimp,cry baby, or mama’s
boy. Other names were given but were too graphic to print. 29%
say they are secretly glad when a player on the other team gets hurt.
So who’s influencing our young players to rough-it-up at all cost?
34% say their coaches priority is the win over safe play. 16% of
the respondents said they or their teammates tried to hurt another player.
When asked who gave them the idea, 57% said teammates, 23% said their mom
or dad, and 11% said coaches. Of the 37% of respondents who said someone
made them or tried to make them play while hurt, 52% said it was a
teammate, 41% said it was a coach, 35% said it was one of their parents.
I’m concerned about the direction of youth sports,” says Dr.
Robert Cantu, renowned neurosurgeon, expert on youth sports safety and
acclaimed author of the book Concussion and our Kids. Over the past
twenty years or so it’s all become so serious. Fun no longer seems
to be the main object. Now it seems to be about grooming your child to be
a star…It can be taken to extremes.
Across the country, young players are all-too-frequent victims of a
sports culture that is turning its back on them, says Mark
Hyman, sports journalist and author of Until It Hurts: America’s
Obsession With Youth Sports. With each passing season youth sports
seem to stray further and further from their core mission of providing
healthy, safe and character-building recreation for children.
More Than Band Aid Solutions:
i9 Sports, a national youth sports franchise that focuses on
sportsmanship, team work, fair play and fun over winning, has created two
solutions to help local parents, coaches and league operators identify
youth sports safety issues: i9 Sports 9 Steps to Safe Play &ndash; i9
Sports created this free, downloadable safety checklist so local parents
can make sure their children’s teams follow best safety practices.
i9 Sports Youth Sports Safety Survey; i9 Sports created this free,
downloadable survey so local coaches and/or parents can give children to
identify sports safety issues on the field before they become a big
problem.
We want the i9 Sports 9 Steps to Safe Play and the i9 Sports Youth
Safety Survey to trigger some eye-opening discussions about dangerous
behavior on the field to ignite real change, says Brian Sanders,
President of i9 Sports. Parents and coaches may be surprised they
have as much to learn about sports dangers as the children. Were
the adults here. The burden falls on us to direct the focus of youth
sports leagues away from cut-throat winning and back to fun, safe
play.
For more information on i9 Sports, visit www.i9Sports.com
* This online survey was done by a third party and commissioned by the
nonprofit arm of i9 Sports.
* Survey participants had no affiliation with i9 Sports.
* The survey included 348 respondents, 210 male and 138 female (ages 8 –
14)