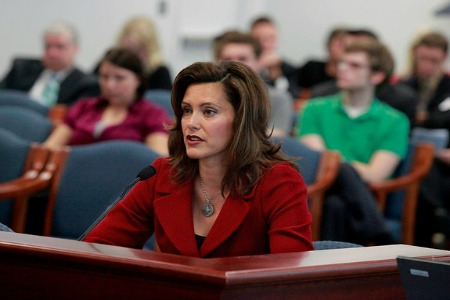 Senate Democratic Leader Gretchen Whitmer announced today that the entire Senate Democratic caucus will be in the Capitol on July 3rd and ready to vote on Medicaid expansion. Senate Republicans said last week they did not see a need to convene the full Senate again until late August despite failing to pass this critically important legislation last week. Whitmer said that the Department of Community Health officials made it clear that it was absolutely necessary to pass Medicaid expansion immediately if there’s any hope of getting the program in place in time.

“Whether Senate Republicans want to actually do their jobs or not, my caucus and I will be in session on July 3rd and stand ready to cast our votes in favor of this program that will provide health care access to nearly half a million Michigan residents and save the state billions of dollars in the process,” said Whitmer. “We need only eight Republicans to be here and ready to work with us that day and I challenge them to do just that.”

The Senate’s next scheduled session day is July 3rd, though Republicans have indicated they donot plan on attending in full or casting votes that day. Governor Snyder and a bipartisan coalition blasted the Senate Republicans last week for failing to vote on the legislation prior to leaving on their summer vacation. While Republicans claimed they would be spending time working to improve the legislation further, they were seen instead spending the day at a $400 per person fishing fundraiser on Friday.

“Despite all their excuses, it’s clear that a vote didn’t take place only because Republicans are caving to the political whims of an obstructionist minority within their own party,” added Whitmer. “The people of Michigan elected each and every one of them to be leaders and it’s about time they act like it.”