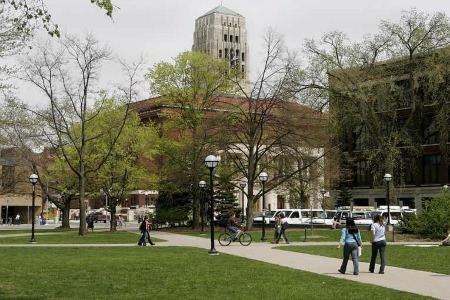 The general fund budget approved today by the University of Michigan Board of Regents contains the smallest in-state tuition increase in nearly 30 years and the largest-ever increase in financial aid.

That combination means that for the fifth straight year there will be no increase in the net cost of attendance for the typical undergraduate student with financial need.

“By supporting programs that ensure academic excellence and making an unflinching commitment to increased financial aid, this budget honors the vision of President James Angell to offer an uncommon education to the common man at the University of Michigan,” said U-M Provost Martha Pollack.

The combination of a small tuition increase and a significant boost in financial aid means the net cost of attendance for undergraduate students with financial need will not increase in the coming year, Pollack said.

“In fact, in many cases it will decrease,” she said.

The net cost of attendance includes tuition and fees, room and board, books and personal expenses, minus scholarship and grant aid.

The budget also will decrease, by $500, the amount of loans that is part of the typical financial aid package for many in-state students. The university will replace some loans with grants—which do not need to be repaid.

Additionally, U-M will be able to meet the full demonstrated need for twice as many out-of-state students through a new financial aid program launched last year. Among the nation’s major public research universities, U-M provides the third-highest amount of institutional aid to students.

Part of what makes this all possible, Pollack said, is the university’s long-term commitment to cost containment and reallocating resources to the highest priorities. She said the budget emphasizes maintaining the university’s world-class standing by recruiting and retaining top faculty and investing in innovative approaches to teaching and research.

“By reallocating funds from lower priority activities, we will be able to invest in academic initiatives including new programs that enhance the student learning experience,” said Pollack, who cited examples such as the new Center for Engaged Academic Learning in the College of Literature, Science, and the Arts; a planned expansion of the Michigan STEM Academies Scholars Program designed to strengthen and diversify students earning degrees in science, technology, engineering and math; and further investments in the University Library collections.

Since 2004, the university has trimmed or reallocated $265 million in recurring expenses in the general fund. The FY14 budget contains more than $24 million in reductions or reallocations, including further steps in the consolidation of IT services, expanding staffing efficiencies across campus and continued implementation of energy-efficiency initiatives.

Overall, the FY14 general fund budget will increase 4.5 percent to $1.72 billion. The main sources of revenue for the general fund, which pays for the core academic mission of the university, are tuition and fee revenue, state appropriation and indirect cost recovery on sponsored research. The FY14 state appropriation is anticipated to be $279.1 million, an increase of 2.2 percent over last year’s budget.

Separately, the U-M Board of Regents approved a proposed 2.5 percent increase in residence hall and undergraduate apartment room-and-board rates. That rate includes 0.5 percent to partially offset projected cost increases and 2 percent to continue funding for major renovations of housing facilities, such as the deep renovation of South Quad that began in May. University Housing is a self-funded auxiliary unit of the university.

The basic cost per student for a double room with a standard meal plan will total $9,996 for the fall and winter terms, an increase of $244.. Rental rates in Northwood Community Apartments IV and V for graduates and students with families will increase by an average of 0.5 percent.

The rate increases reflect adjustments for projected expenses, after planned reductions in operating costs. Offsetting a forecast increase of $1.7 million in employee costs, food supplies and inflation, University Housing is reducing other operating expenses by an estimated $1.3 million for fiscal year 2014. Since 2006, University Housing has achieved $13.2 million in cost reductions that have helped minimize increases in room and board rates over the years.