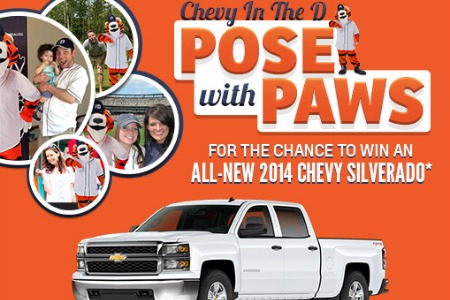 App is part of promotion between the Detroit Tigers and the Metro Detroit Chevy Dealers;

Detroit, MI — June 19, 2013 — The Metro Detroit Chevy Dealers (MDCD), in partnership with the Detroit Tigers, announces a new “Chevy in the D: Pose with PAWS” app for iPhone, Droid, iPad and tablets. The free app is part of a promotion the MDCD is running with the Detroit Tigers to support its mission of giving back to the Metro Detroit communities. A photo contest is being held to launch the new app, with the grand prize winner receiving an all-new 2014 Chevrolet Silverado All-Star Edition.

The “Chevy in the D: Pose with PAWS” app allows users to take a photo with the beloved Detroit Tigers’ mascot, “PAWS”. The app uses a special marker to trigger a 3D version of PAWS and in which fans can either stand in front of the marker or hold a marker in their hand to make PAWS appear in the camera shot. Markers are located at local Metro Detroit Chevrolet Dealerships and in three locations at Comerica Park: Kids Club Kiosk, entrance of the Big Cat Court and on the second level of the stadium. A marker can also be found on the back of the Detroit Tigers pocket schedules with the MDCD “Pose with PAWS” advertisement; a printable format is available online at chevydetroit.com/chevyinthed.

“It is always fun to work with the Detroit Tigers; the Pose with PAWS app is a new way for us to engage with Tigers fans while keeping in mind our mission of giving back to the communities we serve,” said Paul Stanford, president of Metro Detroit Chevy Dealers.

The promotion, which includes a series of monthly contests and runs from June through September, invites users of the app to upload photos and vote for their favorite PAWS pictures. In June, July and August, a monthly winner of the photo contest will receive a $50 Visa cash card. In September, four finalists for the grand prize will be randomly selected from the pool of entries, regardless of the amount of votes the photos received. All four finalists will be invited to the Tigers game on Sept. 21, where the grand prize winner will be randomly selected to receive the 2014 Chevrolet Silverado All-Star Edition in a post- game ceremony. Although the promotion ends in September, the app itself does not have an expiration date.

“We are excited to once again partner with the Metro Detroit Chevy Dealers,” said Steve Harms, Detroit Tigers Vice President of Corporate Sponsorships. “We are looking forward to seeing the creative photos submitted through this promotion and are happy to be able to give back to our loyal fans.”