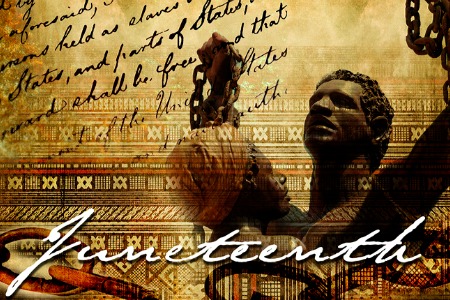 Nationwide (BlackNews.com) — In the 1930s, thousands of formerly enslaved African-American elders dictated their full life stories during interviews that were conducted by the US federal government. These transcripts are stored in six archives in the United States, and compiler Donna Wyant Howell is in the process of categorizing them by subject matter.

Juneteenth was the name given to the celebration that was founded in Texas where the last American slaves learned that they were freed on June 19, 1865. The annual festivities now have spread throughout this country and Juneteenth is an official holiday in many states.

William Mathews: All we talk about freedom git so bad on de plantation, de massa make me put de men in a big wagon and drive em [from Louisiana] to Winfield. He say in Texas dere never be no freedom. I drive em fast and it take bout two days. But dey come back home. Massa say if he catch any of em, he gwine shoot em. Dey hang around de woods and dodge round til de freedom man come by.

We went right on workin after freedom [when first declared]. Old Buck Adams wouldn’t let us go. It was way after freedom dat de freedom man [from the federal government on June 19] come and read de paper, and tell us not to work no more unless us git pay for it. When he gone, old Mary Adams come out. I recollect what she say as if I jes hear her say it. She say, ten years from today, I’ll have you all back again. Dat ten years been over a mighty long time and she ain’t git us back yit, and she dead and gone.