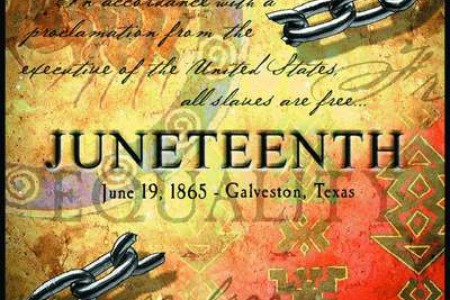 Flint, Michigan – The Frederick Douglass Society is pleased to announce its Juneteenth Celebrations. The events are sponsored by The National Right to Work Foundation and Americans for Prosperity-Michigan.

Describing the event, Bishop David Billy, pastor of Jesus Tabernacle of Deliverance said, “The Word of God declares that: “Whoever sows generously will also reap generously”. -II Corinthians 9:6-8. Thus, I am proud to partner with the Frederick Douglass Society to present to the City of Detroit a Juneteenth Celebration which promotes God’s truth. The Truth is that we have to make social stability and economic recovery a matter of personal responsibility, applying Biblical principles to every aspect of our lives.”

“The celebration will reflect on the valuable lessons of history and also demonstrate how we can move forward towards stability and recovery in a matter that keeps us accountable to God and one another”, he continued.

Confirmed Speakers at the Juneteenth event include:

The Rev. C.L. Bryant–Founder, One Nation Back to God; Film Maker, Runaway Slave, Fellow with FreedomWorks
Ismael Hernandez–Founder, Freedom and Virtue Institute
Stacy Swimp– Nationally recognized speaker, commentator, President of Frederick Douglass Society
Bishop David Billy- Pastor, Jesus Tabernacle of Deliverance
In speaking of the event, Reverend C.L. Bryant said, “The fruit from that Great Endowment of Life, Liberty and the Pursuit of our individual happiness can indeed be captured by the Sons and daughters of former Slaves…. The requirement is that we all bring to the table ‘ The Content of Character’. Not skin color but character this is the key to economic freedom for Black Folks in America…I hope the event will trumpet.”

In addition, the Frederick Douglass Society is hosting a Juneteenth Reception on Friday, June 21, 2013 from 6:30 p.m to 9:00 p.m. at the St Sharbel Banquet and Conference Center, 31601 Schoenherr Rd, Warren, MI 48088. Ticket prices are $40 per person in advance and $50 at the door. Confirmed special guests include:

Registration for both events is available at: www.frederickdouglasssociety.org

The Frederick Douglass Society is also hosting Juneteenth events in Jackson and Flint on June 19 and 20th respectively. Please visit the website for further details.