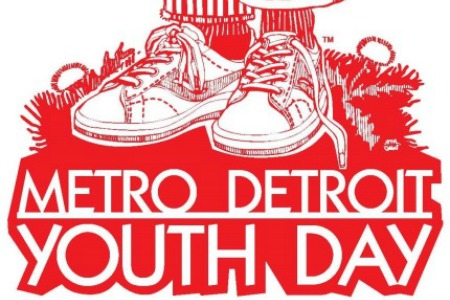 Deeb added, “When we started Metro Detroit Youth Day 31 years ago, it was to instill peace in the community following altercations. It is truly a success story about people and organizations working together for harmonious relationships and a better community. We must continue to work together to also protect our youth and inspire them to do the most good.”

Reduce Crime
With an emphasis on reducing crime, MDYD will offer four workshops for students focused on student and general crime, health and wellness, anti-bullying, and entrepreneurship.

New to Metro Detroit Youth Day this year are partnerships with The Detroit Pistons and the NFL Alumni Detroit Chapter/Gridiron Institute.

The NFL Alumni Detroit Chapter and the Gridiron Institute have partnered with the 2013 MDYD to present their 2013 Youth Football Clinic for metro Detroit youth from 10:30 a.m. to 12:30 p.m.

Former NFL players will conduct fundamental skill drills, instruction and games at the Belle Isle athletic fields. Participants will get a chance to interact with former players such as Lem Barney, Damian Gregory, Ron Rice, and more. Wayne State University football players will also be on hand to assist and sign autographs.

The Detroit Pistons, along with Sprite, committed to renovate the outdoor basketball courts on Belle Isle. Following the unveiling of the renovated courts between 11 a.m. – noon, MDYD and the Detroit Pistons will host the Sprite Ultimate Challenge finalist, chosen from approximately 500 kids that attend summer camps through the Detroit Recreation Center, to compete for various Pistons & Sprite prizes. Day of event during MDYD will include Pistons legend(s), player and entertainment teams.

Education
MDYD will award scholarships to deserving students who submitted an application and essay to be considered. MDYD received 160 submissions this year, which is a record amount. MDYD provides more than $35,000 in scholarships each year. Since 1991, MDYD has awarded nearly 1,000 scholarships. Scholarship funding is also provided by Michigan’s colleges and universities, event sponsors, companies, organizations and the general public. Additionally, MDYD will recognize area high school students for community and academic achievement. The scholarship award presentation begins at 8:30 a.m.

“Education is a significant focus area for the GM Foundation and Metro Detroit Youth Day provides an opportunity to bring young students together to learn more about universities and their educational options,” said GM Foundation President Vivian Pickard. “This is just one of many initiatives that we support to bring area students the resources they need to succeed.”

Free Lunch
Courtesy of members of the Michigan Food and Beverage Association and the food industry, youth and volunteers attending MDYD will be provided with a free lunch, which includes various foods and beverages.

Entertainment
Kids, from ages 8 to 15, who won an opportunity to perform during MDYD, will provide entertainment for event guests by singing and dancing, including the finalists in the MDYD Idol Contest. The Mosaic Youth Theater will also perform as well as musicians from the Michigan State University Community Music School in Detroit. Motown star Martha Reeves will sing the National Anthem during the opening ceremony of the event, which starts at 10 a.m.

Deeb added, “It’s important for today’s youth to recognize that the community, business people and civic groups support them and their future. It’s an inspiring day to see our youth gather on Belle Isle to experience a day full of positive support.”