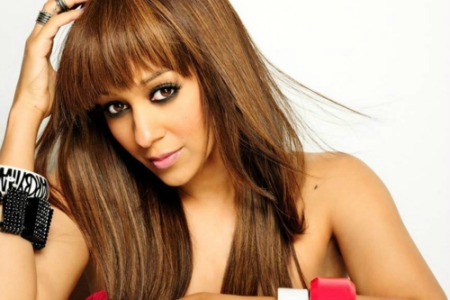 Tia Mowry, who first came to the public’s attention in 2006 co-starring with twin sister Tamera in the popular sitcom “Sister, Sister,” would never wear a “meat dress,” as did Lady Gaga. Not only for aesthetic reasons, but also because she is a staunch believer in veganism.
And for those who don’t know, vegans not only do not eat meat but also use no animal products in their diet and lifestyle. Vegetarians, on the other hand, might eat dairy products.
Mowry is featured prominently in a new PETA ad campaign wearing a (short) dress made entirely from lettuce leaves. (It’s the kind of dress a lady only wears once, and there is little chance of going to a party and encountering someone wearing the same dress!) The dress was made by Mia Gyzander.
The ad campaign is titled “Let Veganism Grow on You.”
In a recent PETA interview, Mowry said, “I wanted to become a voice for my community. I wanted to educated my culture about the benefits of becoming vegan. The more you learn about the benefits of being vegan, the more you become alive and the more you become aware of why it’s a really great decision. Not only am I helping myself, I’m helping the animals out there, I’m helping the environment. I feel great.”
One gentleman quipped, “Tia looks good enough to eat.”
Tia Mowry married actor Cory Hardrict in 2008 after dating for six years. They have a son, Cree Taylor Hardrict.