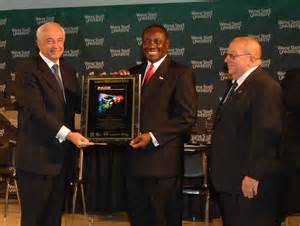 Wayne State University’s Forum on Contemporary Issues in Society (FOCIS) will hold a community discussion and workshop on June 13 at the International Institute of Metropolitan Detroit, located at 111 E. Kirby.
The free event, titled “What would you do?,” continue the successful FOCIS series, which is designed to educate high-performance (active and registered) voters about historical factors and events that contributed to Detroit’s economic crisis.
During this year’s tabletop exercise, participants will act in the roles of mayor and city council as they deal with the presence of an emergency manager navigating the complex landscape facing city leaders and elected officials.
The event will run from 5:30 to 8:30 p.m. and is expected to draw approximately 100 attendees from various backgrounds. They are being coordinated by FOCIS and its CitizenDetroit initiative, the Irvin D. Reid Honors College and the Eugene Applebaum Chair in Community Engagement.
Reid and former Detroit City Councilwoman Sheila Cockrel are the event hosts. Reid, president-emeritus of Wayne State, is inaugural holder of the Applebaum Chair, director of FOCIS and a principal organizer of CitizenDetroit. Cockrel is a CitizenDetroit co-organizer, WSU Honors College faculty member, and the budget committee chair.
As a member of Governor Snyder’s Detroit Financial Review Team and a co-signer of the Financial Stability Agreement between the City of Detroit and the State of Michigan, Reid has a unique perspective on the value of CitizenDetroit as a catalyst for putting the power of change back into voters’ hands.
Reid pointed out that the city’s elected leaders continue to face daunting challenges as they work to provide badly needed resources to residents and try to revitalize the regional economy.
“Following the recent appointment of an emergency manager, Detroit’s elected officials now must work within the new dynamics established under the laws and guidelines of the EM position,” he said. “This is a considerable challenge, and one that must be met in order to achieve success. The role of Detroit’s citizens in this process is critical as they become earnestly engaged in the political process and motivated to initiate constructive action. For this to occur, citizens must be educated about the social and political issues facing Detroit.”
For more information about FOCIS and CitizenDetroit, visit focis.wayne.edu/.
Admission to the event is free, however, seating is limited and reservations are required. RSVP to: https://specialevents.wayne.edu/2013focis-CitizenDetroit, or call 313-577-0300.
About FOCIS Established in 2007, FOCIS is a special initiative that focuses Wayne State University’s problem-solving resources on an eclectic range of topics important to the campus community and beyond. FOCIS lectures and related events bring together the institution’s teaching, research and service missions to advance the frontiers of knowledge, promote informed debate and encourage responsible citizenship in an increasingly fast-paced, interconnected and complex global society. FOCIS involves coordinated public programs, foreign-study projects, research opportunities and ongoing community dialogue addressing specific issues that confront the citizens of Detroit, the United States and the world.
The Honors College The Irvin D. Reid Honors College promotes informed, engaged citizenship as the foundation for academic excellence in a diverse global setting. The Honors College encourages students to enter public service and prepares them to do so in ways that benefit the communities they serve. The college integrates instruction and reflection with meaningful community service to enrich the learning experience, teach civic responsibility and strengthen communities. Through this concept, known as service-learning, students use what they learn in the classroom to solve real-life problems. They learn the practical applications of their studies to become contributing citizens and community members through the service they perform.
About the Eugene Applebaum Chair in Community Engagement The Eugene Applebaum Chair in Community Engagement was created through the generosity of alumnus Eugene Applebaum, founding chair of the Wayne State University Foundation. The Applebaum Chair is a catalyst for cooperation between the university and community organizations on issues in business and economic development, education, health, international outreach, politics and other areas. FOCIS is the Applebaum Chair’s primary public platform.
Wayne State University is a premier urban research institution offering more than 370 academic programs through 13 schools and colleges to nearly 29,000 students.