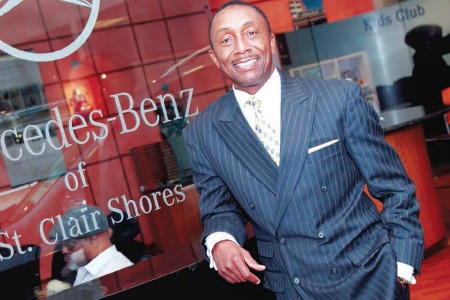 It is one thing to have tremendous business acumen and quite another to discipline it, master it and apply it with great skill within the confines of the business university. That takes keen intellect, razor-sharp focus and a deep and abiding desire to succeed. Simply put, there aren’t many things more impressive than a great business mind that fused with a passion to be the best. This narrative is the Cliffs Notes version of Gregory Jackson, president and chief executive officer of Prestige Automotive Group and Jackson Automotive Management. The full version is displayed every day as he leads one of the most successful African American-owned car dealership franchises in the country.
Jackson’s success is not happenstance. It’s the culmination of wanting the most out of life and doing the things necessary to attain it. “I’ve always had a strong desire to be more than the world said I could be,” the Detroit native says. Growing up in a rugged neighborhood on the city’s west side near Linwood Ave. and Joy Road., Jackson had a paper route for seven years. He’d read the newspaper every day from cover to cover, learning about Detroit-area business moguls Al Taubman, Max Fisher and others. “Reading about them gave me an appreciation and a greater understanding that there was something bigger in the world than Linwood.”
Jackson found big things indeed. After working in corporate America for several years, he realized he wasn’t quite cut out for it. He concluded that being an entrepreneur was his only option to achieving the kind of success he envisioned. While in the midst of searching for that one entrepreneurial opportunity, Jackson owned and operated a gourmet cookie business; a small accounting firm and he invested in real estate. It wasn’t until he entered General Motors’ Minority Dealer Training Program that he found his niche. After completing the program in 1989, he worked at several dealerships in various capacities while at the same time searching for a dealership to buy.
In September of 1993, he purchased Prestige Pontiac-Oldsmobile in Mount Morris, Michigan. The organization grew, becoming one of the most successful African American-owned businesses in the country. When Prestige Automotive Group grossed $1.67 billion in sales in 2005, Jackson became the first African American to lead an auto dealership group with more than $1 billion in annual sales. His organization then became one of only three African American-owned companies to have reached yearly sales of $1 billion or more. Jackson has owned a total of 18 dealerships but had sold all but three: Mercedes-Benz of St. Clair Shores, Toyota of Warren and Courtesy Ford of Okemos. He is also one of only four African Americans in the country to own a Mercedes-Benz dealership.
Jackson says there’s no magic wand or secret to his success, just good old-fashioned hard work. “I may or may not be the smartest person in the room, but very few people will outwork me. So when others are asleep, I’ll be up getting the job done,” he said.
The married father of two earned an accounting degree from Morris Brown College and a master’s in finance and marketing from Atlanta University’s Graduate School of Business.