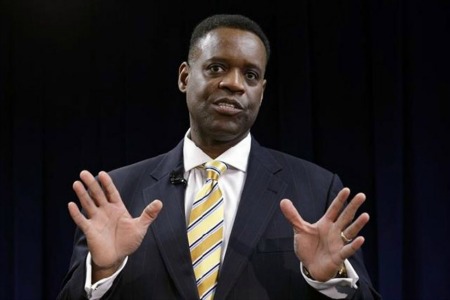 Kevyn Orr’s impact in Detroit was not felt much across the board until his office signaled last week that the assets of the Detroit Institute of Arts, a major international tourist attraction, could be on the table for sale as the city fights to recover financially, $15 billion in debt.
That means precious art collections at the DIA could potentially be exposed to creditors because they are listed as City of Detroit assets.
Mentioning the DIA and indicating a potential appraisal of its 60,000 works of arts set off a firestorm of reaction not only from the DIA and its patrons but almost everyone in Detroit.
On Facebook, it dominated conversations about the future of Detroit.
“That is the problem with Detroit. No one saves the history…just dismantle and discard,” Ilene Johnson wrote on this writer’s page.
Bernard Goldfinger wrote that instead of looking to city assets like the DIA, the state or the federal government should settle Detroit’s debt.
“For years Detroit lacked investors and population decline drove down our tax base. Without good services and tourist attractions we won’t change the situation. Throughout all of our mishaps, citizens have paid some of the highest taxes in the country,” Goldfinger wrote.
Meanwhile Orr’s alarm forced the DIA to quickly hire a New York bankruptcy lawyer, Richard Levin of Cravath, Swaine & Moore, to protect the longstanding Detroit institution in the event the city files for chapter 9 bankruptcy.
But the contention is that the DIA’s arts are not in a public trust even though officials from the museum say it is.
Orr’s spokesman, Bill Nowling, said at present the city is looking at all of its assets and the DIA’s arts collection are among them. Although Detroit owns the DIA, and some of the collection in it, other collections were donated by individuals who could have developed terms or agreements regarding how their collections should be used.
However, if Orr is already considering appraisal of the DIA and its arts what else could be under consideration?
It remains unclear if other museums in the city like the Charles H. Wright Museum of African American History — the largest of its kind in the nation — the Detroit Historical Museum and other city institutions like the Detroit Public Library are on the chopping block as well.
In repeated interviews with the Chronicle, Orr has signaled that everything is on the table as far as creating a path to financial solvency for the city.
But he has not explicitly mentioned selling any city assets, even though some of his critics and the opposition against an emergency manager have used the prospect of selling assets like the Detroit Water and Sewerage Department as their rallying cry against the appointment of Orr.
Rocky Raczkowski, an Oakland County Republican advocate who engaged in a bitter congressional battle with Rep. Gary Peters in the past, said, “Any turnaround person that is truly committed should be looking at every possible way to avoid bankruptcy, not planning on it. This is extremely disappointing to all of us.”
In his first exclusive interview with this writer, Orr called Detroit’s turnaround task “the Olympics of restructuring” because of what it involves as many are now feeling the weight of a recovery, and the DIA has a part in it.
“The thing that’s different here and is different in chapter 9 definition is there is a bystander as the citizens and the constituents of a municipality. In a sense the balance sheet aspect of what we have to do is pretty straightforward as I keep saying,” Orr said.
“The math is the math: maintaining city services, dealing with efficiencies, addressing people’s fears and anxiety, public safety and the employees. Detroit is one of the largest employers in Wayne County, if not the largest. That’s what makes it so difficult and doing that in an environment where you recognize what you do is going to have consequences to people. When I’m in a business deal, this is business. This isn’t personal.”
The Association of Art Museum Directors (AAMD) issued a national statement last week urging Orr to leave the DIA alone.
“A museum’s collection is held in public trust for current and future generations. This is a bedrock principle of the Association of Art Museum Directors and of the museum field as a whole. Art collections are vitally important cultural and educational resources that should never be treated as disposable assets to be liquidated, even in times of economic distress.
Those involved in the discussion of the financial challenges that Detroit faces today must make thoughtful decisions that will serve to strengthen the city in the future,” AAMD said.
“Selling the collection of the Detroit Institute of Arts would undermine this goal. The Association of Art Museum Directors strongly encourages the Detroit emergency manager and everyone involved in the process of addressing the city’s fiscal issues to preserve this irreplaceable collection to ensure that it will remain in place as a cornerstone for the city’s resurgence.”
E-mail bthompson@michronicle.com.