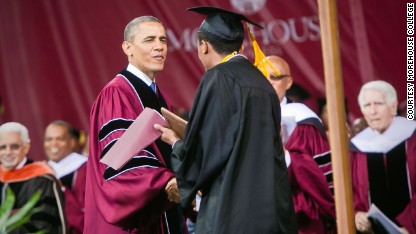 By Meron Moges-Gerbi, CNN
(CNN) – On a rainy afternoon this spring when President Barack Obama gave the commencement speech at Morehouse College in Atlanta, he called valedictorian Betsegaw Tadele the “skinny guy with a funny name” – a moniker Obama has often used in reference to himself.
So, who is that other “skinny guy?”
Tadele’s journey to share the stage with the President of the United States began in Addis Ababa, Ethiopia. The youngest of Tadele Alemu and Almaz Ayalew’s two children. the Morehouse scholar’s first name, Betsegaw, means “by God’s grace” in Amharic, his native language.
In the summer of 2009, Tadele came to the United States in pursuit of a higher education.
Morehouse College was not Tadele’s first choice; he was initially interested in more technical schools. Morehouse only awarded him enough scholarship funds to pay for tuition, not room and board. But Tadele’s brother happened to be living and working in Atlanta. Tadele saw this as an opportunity to spend time with his brother while taking advantage of what the university had to offer. Morehouse became his new destination.
After four years at Morehouse, Tadele had a 3.99 GPA. He graduated with a degree in computer science and a minor in mathematics. He won departmental awards in math and the school’s computer science leadership and scholarship award, led Morehouse’s Computer Science Club and is a member of Phi Beta Kappa. 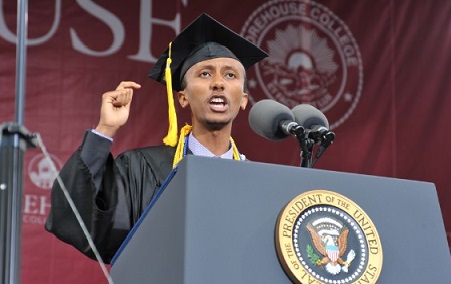 “There is no impossible. There is no unbelievable. There is no unachievable, if you have the audacity to hope,” Tadele said during his speech, paraphrasing the name of the president’s 2006 book, “The Audacity of Hope.”
The next stop in Tadele’s journey is Seattle, where he’ll work for Microsoft.
Here’s what Tadele had to say about meeting the president and graduating from college:
CNN: First thing first, what was it like to meet President Obama?
Betsegaw Tadele: I didn’t really get to meet him except on stage. There were a lot of Secret Service (agents) around him. Many were suggesting I go and hug him, but I couldn’t do that. But it was great; after my speech, he got up gave me a hug and told me he was proud of me. That was a great honor.
CNN: What was the greatest part of being a Morehouse valedictorian?
Tadele: It was great to be able to mark that moment and summarize our journey at Morehouse. I wasn’t nervous at all. I could feel the energy of the crowd, everyone was happy to be there. It was an honor to be able to acknowledge all these parents who sacrificed so much for their kids to be there. Acknowledging them and our hard work and the energy of that moment was unforgettable.
CNN: How did it feel to have President Obama talk about you during his commencement speech, and later receiving a standing ovation from him?
Tadele: That was really great! I heard him call me “the skinny guy with a funny name,” and I knew I heard it somewhere and I later found out that he was comparing me to himself, which was great. Some people in the Ethiopian community who had not heard him use the phrase on himself before found it offensive. They thought that “skinny” was a reference to the Western image of Ethiopia as poverty-stricken country and “funny name” as a trivial jab at my Amharic name. In fact, it was getting so out of hand, that I actually had to clarify on Facebook where the reference came from.
CNN: Quoting President Obama, “As Morehouse men, many of you know what it’s like to be an outsider; know what it’s like to be marginalized; know what it’s like to feel the sting of discrimination. And that’s an experience that a lot of Americans share.” What has been your experience during your educational journey in the United States as an Ethiopian? Do you relate to his statement or was he aiming this only at the black community as some critics have stated?
Tadele: I do think the president was making a particular reference to the African-American experience, which is appropriate considering that he was the commencement speaker at a (historically black college or university.) However, more than that, he was speaking of the human experience. The struggle of fitting in a place that is new and strange is a common experience. As human beings, we fear the unknown. As long as there are people who deviate from the norm, there will always be people who discriminate against them. And thus discrimination is a universal experience.
When I first came to Morehouse, people thought I was not smart because of my strong English accent. As a native of Ethiopia, I have a very noticeable accent when I speak English, which leads a lot of Americans I meet to assume that I am not very smart. The cause for this assumption is simply the fact that experience and norm say that smart people’s English sounds good. I had to prove myself. I can associate with a Morehouse man who might be stereotyped because of his color of skin.
CNN: Is it all work? What do you do for fun?
Tadele: Like most Ethiopians, I like to sit in Starbucks and have coffee, hang out with my friends. I was pretty involved in my church youth group until about a year ago. I spent a lot of time with them and that is a big part of who I am. I do spend a lot of time on computers. To me, computers are not work. I enjoy working on them. I don’t see it as work at all, so that is fun for me.
CNN: Who or what inspires you?
Tadele: I have had many people who have served as my role-models, but none more than Jesus. Though I am a technically inclined person, I don’t believe that I can have a meaningful life through my technical skills. I think, more importantly, my character and who I am as a person has a lot more to do with how meaningful my life is. And for this, the best example I have is Jesus.
He inspires me to work harder every day to prioritize people over my work. I try every day to shape my character like him. It is this attitude that enabled him to change the world.