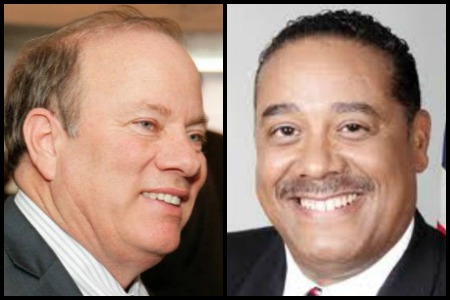 A new poll puts Wayne County Sheriff Benny Napoleon ahead by a nose in the Detroit mayoral race after current Mayor Dave Bing’s announcement that he won’t run for re-election.
The survey conducted by Target Insyght and released by MIRSnews.com shows Napoleon in the lead with 30 percent support, just ahead of former Detroit Medical Center CEO Mike Duggan with 28.7 percent.
Polls have shown the two exchanging the lead for months.
The poll used a sample of 500 likely voters asked in automated interviews about six leading candidates. The survey had a 4.5 percent margin of error.
Napoleon’s 30 percent was up from the 27.4 percent he recorded in an April poll conducted by the same agency.
Duggan’s 28.7 percent was down from 34.8 percent.
Candidate Tom Barrow saw a significant jump from 4.7 percent in April to 10.4 percent for third place.
The city’s former top attorney Krystal Crittendon trailed with 5.3 percent, followed by former state House Rep. Lisa Howze with 4.9 percent, Rep. John Oumba with 2.2 percent and Rep. Fred Durhal, Jr. with 1.8 percent.
In a head-to-head race, Napoleon leads Duggan 45.1 percent to 39 percent, although the poll indicates 15.9 percent would still be undecided in the two-candidate scenario.
Duggan led Napoleon in support from voters over 60, 35.6 percent to 25 percent.
And Napoleon led among female voters, 35.3 percent to 25.4 percent.