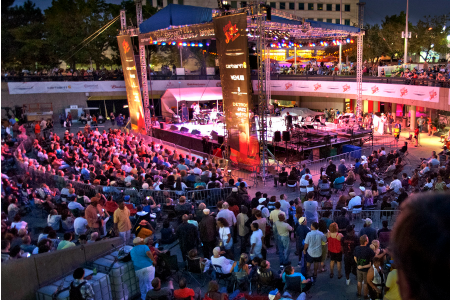 Jazz can never be put in a box. It cannot be classified as one musical genre, style or artist. It takes its rightful place in modern music traditions and legacies. As eclectic as it is electric, jazz is resilient and proudly confident wherever it is played. The Detroit Jazz Festival is Detroit and has been for 34 years, never missing a beat.
JAZZY NOTES
When the Detroit Jazz Festival descends on Detroit, it does not come quietly.
With more than 250,000 enthusiastic fans, the free outdoor music festival attracts some the top names in jazz from around the world and the city. Detroit’s music legacy and traditions have earned it bragging rights as an uncompromised jazz hub.
A pivotal agent in the molding of America’s jazz sounds, the city has long been an urban incubator for all genres of jazz. Its native sons and daughters stand tall among jazz greats. Detroit and jazz are connected.
BIG DIGS
As the only free festival of its kind in the country and recognized as one of the top three festivals in the world, the Detroit Jazz Festival is the place to be for jazz fans.
The widely praised Pure Michigan advertising campaign, credited with resurrecting the state’s tourism industry and putting Michigan on the national travel map, recently announced that it will aggressively promote the Detroit Jazz Festival and other signature events as part of a $50 million campaign to attract visitors from other states and countries.
While the place to be for thousands of local residents, 17 percent of those attending the Detroit Jazz Festival travel hundreds and thousands of miles to stay at our hotels, dine in our restaurants, shop and purchase from our vendors during the music filled Labor Day weekend.
Jazz brings together an audience that is every bit as diverse and inclusive as the artists they come to see.
The estimated annual economic impact of the Detroit Jazz Festival is in the tens of millions. A more definitive economic impact study will be released following this year’s event.
Connecting Cultures
Just as the music is diverse, the jazz festival attracts and embraces audiences from different backgrounds, ethnicities, cultures, ages, education and incomes. Blue color, white collar and no collar, suburban and urban, people attending the festival come together to enjoy something they all have in common — a love of jazz.
A Personal Invitation
There may be no better opportunity than the Detroit Jazz Festival to showcase the best of Detroit. What a great way to entertain clients and cultivate new business prospects.
From Aug. 30 through Sept. 2, jazz artists will showcase the best of jazz, leaving an indelible impression among musicians and fans alike.
Nothing will ever beat the sound of the Detroit Jazz Festival and the people it brings together. For more information on the 2013 jazz artist line-up, sponsors, VIP passes and membership opportunities, community events and updates, visit detroitjazzfest.com. Join us Labor Day weekend to experience and celebrate one of the city’s treasured gems that shines bright each year — the 34th annual Detroit Jazz Festival.
Editor’s Note: Sharon Banks is the chair of the Detroit Jazz Festival Board of Trustees and a member of the Detroit Jazz Festival Foundation Board of Directors
A Look Back at
Detroit’s Jazz Scene
The Detroit International Jazz Festival was founded in 1980 by Robert McCabe and the Detroit Renaissance, an organization with a roster of corporate and business leaders. The festival was developed to provide an opportunity for people to come together to enjoy world-class jazz and showcase pride in Detroit.
In 1991, the festival merged with Detroit’s Music Hall Center for the Performing Arts where it resided until September 2005.
In January 2006, jazz enthusiast and philanthropist Gretchen Valade founded the Detroit International Jazz Festival Foundation with its goal to produce and manage the popular festival. Proprietor of the popular Dirty Dog Jazz Café and the Mack Avenue Records jazz label, Valade was committed to saving the festival from extinction when funding dwindled. Her commitment to Detroit and the jazz festival resulted in establishing a $10 million endowment that provided much needed seed funding for festival operations.
Renamed the Detroit Jazz Festival, it now spans three blocks along Woodward Avenue from Campus Martius to Hart Plaza on Jefferson Avenue on the banks of the Detroit River.
Attracting noted jazz headliners, the festival is also home to many of Detroit’s finest musicians and students who participate in year-round education and community outreach programs with coveted opportunities to perform at the festival.
Year-Round Programming
The Detroit Jazz Festival provides opportunities for local artists to participate in events leading up to Labor Day weekend beginning as early as February and continuing well past Labor Day weekend.
Now in its fourth year, the Jazz Infusion Program supports Detroit Public Schools to help foster the growth of young musicians to compete for college scholarships, pursue careers in music, and continue Detroit’s rich and deep jazz tradition.