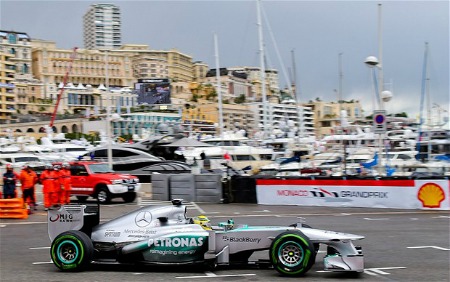 The Monaco Grand Prix Formula One World Championship just ended with Monaco’s own Nico Rosberg – Team Mercedes – as the winner.  My adrenaline heightened while I sat on the edge of my couch as the drivers raced around all 78 laps of the 2 mile street-circuit track.  (Rosberg completed the last lap in 1 minute, 3.876 seconds – a little more than 30 seconds per mile.)  A speed demon myself, the race has me looking forward to the upcoming Chevrolet Detroit Grand Prix, which will be held next weekend, May 31st to June 2nd.  I used to watch the first Grand Prix races in Detroit when it too was a street circuit race.  I watched it from the roof of one of the buildings in downtown Detroit.  Today the Detroit Grand Prix runs on a 2.3 mile raceway at Belle Isle Park. See our Hot Lap Ride around Belle Isle here  In addition to the sport and excitement that the Grand Prix will bring, the event will have a much-needed $50 million economic impact on our city.  Throughout the Grand Prix, visit  www.michiganchronicle.com to read about some of the events as they are happening. Tickets can be purchased by calling 866-464-PRIX, of by visiting the Grand Prix offices at GM Renaissance Center, 300 RenCen, Suite 311, Detroit, Michigan  48243.  See you at the Grand Prix!!!     Cathy Nedd is the chief operating officer at the Michigan Chronicle, the states oldest, most progressive weekly newspaper.