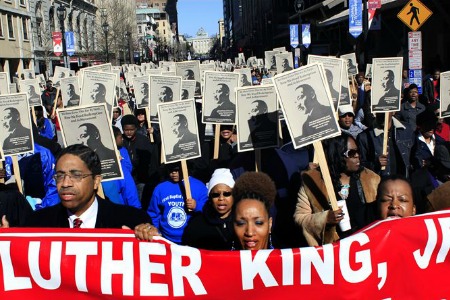 Detroit Branch NAACP President Rev. Wendell Anthony today unveiled plans for the 50th anniversary of the March on Woodward led by Dr. Martin Luther King Jr.
Several organizations, institutions and individuals, including the NAACP and the United Auto Workers (UAW), are joining hands in a coalition to celebrate the 1963 march, which was the prelude to the March on Washington for Jobs and Justice. It was at the Washington march and on the steps of the Lincoln Memorial that King delivered his famous “I Have a Dream,” speech now cited as one of the greatest oratory presentations in history.
The Detroit celebration on June 22 will be a march down Woodward Avenue following the same route that King took when he marched in Detroit, organized by the Detroit Council for Human Rights and chaired by the late Rev. C.L. Franklin.
“It has been 50 years since Dr. King walked down the streets of Woodward Avenue in the city of Detroit to begin a collection from the bank of freedom and justice. He would later declare at the mall in Washington in August 1963 that the check has come back marked ‘insufficient funds,’” Anthony told a media roundtable today at the NAACP offices in Detroit.
“Even though the check came back marked ‘insufficient funds,’ Dr. King still declared to the world that he had a dream. That dream was for people to be judged not by the color of their skin but by the content of their character. The dream was for jobs, justice and peace.”
Anthony said recreating the historic march down Woodward with labor, faith-based, community, business and grassroots organizations is to continue to demand equality at the highest levels of government.
This year’s commemoration will feature a long line of speakers and there is no keynote speaker.
Despite the progress that has been made since the King years and with Barack Obama becoming the first African American president, Anthony said, “We are mindful that we still need jobs, justice and peace. We are mindful that democracy is under attack. We are mindful that everyone is not pleased with the changing realities that are visible within our nation.”
Rev, Franklin, who was a close friend of Dr. King, said this about the March on Woodward and its significance to succeeding generations:
“A demonstration should be held every year on the last Sunday in the month of June until the last vestige of inequality in this country is wiped out. It is our responsibility to fight for what is ours, and that means every day.”
Franklin, who was pastor of New Bethel Baptist Church, led the Detroit Human Rights Council and its directors including Jackie Vaughn III, Rev. Albert Cleage, James Del Rio, Rev. J. A. Bruce, Rev. Ordie Burns and Lillian Hatcher on May 17, 1963 to unanimously adopt the “Declaration of Detroit,” resolution at his church.
African Americans at the time had only consisted of 30 percent of the city’s population, but according to the resolution they made up of “70 percent existing in substandard housing; denied after 100 years of Constitutional freedom the full measure of the social contract, we do hereby declare before God and all men that we will no longer abide, tolerate or countenance this manifest injustice.”
The demands in the resolution for some still ring true today as Blacks continue to face some of the same hurdles, notwithstanding the progress that has occurred in the Black community since 1963.
Events leading up to next month’s celebration will include a series of strategy sessions called “Voices for Action” on June 21, on the eve of the anniversary dealing with the rights of workers and the necessity to provide opportunities in job creation, entrepreneurship, ending youth violence and protecting the right to vote.
A video contest for school and college students is also part of activities marking the anniversary, according to NAACP Executive Director Donnell White. Students wishing to enter the contest are asked to upload a one-minute video explaining how they are helping to rebuild their community at www.freedomwalkdetroit.com/contest, the official website for the program. Students could win prizes such as an Apple MacBook Pro or an Apple iPad Mini.
“We thought it was important that we connect King’s legacy with today’s actions, and youths working toward Detroit’s revitalization is a perfect way to do that,” said Anthony.
UAW Vice President Jimmy Settles said, “We have many milestones to celebrate since King walked Detroit’s streets. But we are asking that everyone take a step toward finding solutions as we go forward and the anniversary celebration is a good place to start.”
E-mail bthompson@michronicle.com.