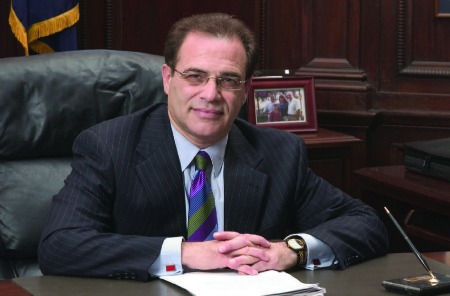 According to Wayne County Executive Robert Ficano, municipal finance is the one issue attendees of the Mackinac Policy Conference need to discuss this year.
He said Wayne County has lost $100 million since 2009 because it depends on property taxes. “The state’s revenues have gone up, and all of it has been because of action that helps themselves,” Ficano said. “For example, the auto industry really is the thing that has bolstered the state in the past couple of years because it has come back up.”

He also said when there are increases in employment — such as 1,000 jobs at the Wayne Assembly Plant or 1,200 in Flat Rock — everyone pays income tax, but all that revenue goes to the state. “None of it is seen on the local level,” Ficano said.

He also noted that when people are working, they buy more things, but the sales taxes from those purchases likewise go to the state. “On top of that, the state has increased its income tax rate from 3.9 to 4.25,” he said. “They’ve eliminated a number of deductions, and also tax pensions. So all that revenue goes to the state of Michigan, so if you had two charts, you would see the state of Michigan’s going up like that, and they never anticipated property values would drop like this. So we’re limited.”

Ficano said that even if Wayne County bounced back to where it was in 2009 regarding property values, it would take until 2025 to get there because there is a 5 percent cap on each year it could increase. “Well, it’s not bouncing back at that rate,” he said. “So, that’s the dilemma we face in this.”

Ficano pointed out that the state government increased its budget in every department except the Department of Corrections. “That’s their prerogative, but meanwhile revenue sharing and everything else has decreased,” he said. “There’s this dichotomy that’s going on.” Ficano noted that people depend on their local governments for things like education, police and fire. “If you have an education issue, you don’t call up the Department of Education of the State of Michigan, you go to your local school board,” he said. “You dial 911, you don’t get the state, you get your local police and fire department. And so those kind of revenues are the things that are necessary.”

He compared metro Detroit to Chicago, saying each community in the greater Chicago area has its own tax index. “Then if you go out Cook County or something it’s a different tax,” he said. “Michigan used to be like that. And instead, the state said, ‘Let’s have one universal collection and we’ll feed it back to you locals by revenue sharing.’ Well, it’s universal now, but we don’t get any of the revenue sharing at the rate that it was promised.” The state has constantly reduced it.

According to Ficano, there will be forums regarding all the revenue increases coming into the state. “We’re having a local forum with all the Wayne County communities, and then we’re hoping for a statewide forum,” he said, adding that they have a lot of interest.

Ficano said there are 180 fiscally-challenged communities in Michigan.
“Are you going to appoint 180 emergency managers?” he asked with a laugh. “Or if they do, you’re going to have a really difficult time with it. So you need a Proposal A moment.”

Education is one of the issues being discussed at the conference. Asked his thoughts on improving education in Wayne County, even if he were just speaking as a citizen and not as county executive, Ficano said you cannot “emergency manager your way out” of education problems.

He also said most people like their teacher, but they think the system is askew.
“It’s an odd situation that you see a lot of times with parents,” he said.
is daughter, who teaches in Ann Arbor, told him that from a practical standpoint, there are one or two ways you start to teach. “You teach them to a test level, and you can probably get them to a test through memorization, through rote and things like that.” he said. “But are they going to be able to continue on lifelong learning, and what education’s supposed to do? You need that balance.”

Ficano noted that law students don’t memorize laws, because laws are going to change. “The same type of thing has to go into education,” he said.
He admitted that he’s out of his league on that point, as he isn’t an educator, but said young students need to be able to evolve in their education. And he acknowledged that students need to learn the basics, especially reading.
Ficano spoke out against the proposed $1 million cap on benefits for people injured in an auto accident.

“I don’t agree with it at all,” he said. “I think that it hurts, even with national health care coming, the cost for catastrophic injuries you get in a car accident can go above $1 million in a heartbeat.”

He also said it’s not going to take rocket science to answer the question of whether the insurance companies are likely to be the ones to try to do this.
This goes in line with the elimination of the deductions you used to see in income tax.

“You used to get a deduction for tuition, you used to get a deduction for dependents, for youngsters and things like that,” Ficano said. “And all that’s been eliminated. All that helped people in need with their daily lives.”
He said you wonder how well some of this is thought out, adding that it creates this cycle of “have nots” continuing to be have nots. With respect to Gov. Snyder, Ficano said he disagrees with the governor on a lot of issues, but believes he’s trying. “I vehemently disagree with him on right to work,” Ficano said.

Ficano wants Snyder to focus on business, to build a business environment.
“But it seems like all these auxiliary issues are popping up,” he said, adding that the basic things are that people want jobs, they want a good education, and they want their kids to go to college. He emphasized that these aren’t Democrat or Republican issues, and that Michiganders would benefit from a focus on those areas.He said Snyder tries hard, but some of his priorities — like right to work — are the wrong moves.

Asked what he’d bring to President Obama’s attention if the president could only spend an hour in Wayne County, Ficano said he’d first thank him for what he’s done for the auto industry.“I can’t imagine what the economic landscape would be in this area,” he said. “Because it would have basically cannibalized. People don’t even realize Ford would have gone down, too.”Ficano would also bring the president into the neighborhoods of Detroit and say we need help.