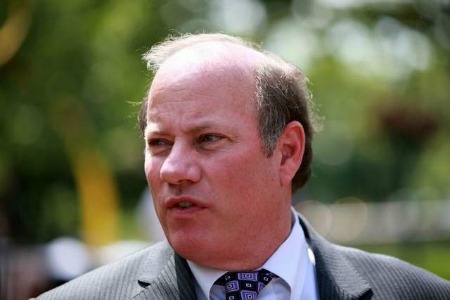 Mayoral candidate Mike Duggan is unrelenting in his opposition to authorities for Detroit.
Since his campaign for mayor began, Duggan has been opposing any publicly created bodies to oversee the city’s institutions like the health department, saying addressing the city’s difficult challenges should be left to the elected representatives of the city.
Duggan, the former CEO of the Detroit Medical Center in a crowded race for mayor that includes Wayne County Sheriff Benny Napoleon and a host of other candidates, said Detroit Police and Fire departments should not be placed under an authority.
“The move to the health institute was a mistake. I think the privatization of the job training program was a mistake, the streetlight authority at least gets you some bonding capacity,” Duggan said during a wide ranging interview with the Michigan Chronicle. “But I would hate to see the streetlight repair management be fragmentized. And I’m certainly very concerned that the police and fire not to be put into an authority because the voters of this city expect the next mayor to come in and get the police to show up and get the abandoned buildings down.”
Duggan said if Detroit’s emergency financial manager, Kevyn Orr, “fragments those authorities to ten different places, you are going to run to the mayor unable to perform his or her job. And I’ve very concerned about that.”
On the Detroit Water and Sewerage Department (DWSD), Duggan said, “I think we restructure to make it much more efficient. One of the things that is most troubling is to see the city of Flint go their own way. If we are not cost effective we are creating incentives for cities to get off the system.”
He said DWSD needs serious restructuring.
“I think we’ve got an obsolete job classification system. We’ve got too many people in some jobs and not enough people in other jobs,” Duggan said. “But that water system was built by the City of Detroit, is owned by the City of Detroit. We need to prove the efficiency ourselves and we stop the conversation about somebody else taking it over.”
The former Wayne County prosecutor also ripped the Belle Isle lease apart that would have allowed the state to run the park.
“As far as I was concerned there was nothing in the lease that required the state to build anything specific. So in my mind the lease itself was deficient,” Duggan said. “I don’t know a single business person that would have signed that lease. The state made a bunch of commitments in the newspaper. Those commitments were not guaranteed in the lease.”
Duggan compared the Belle Isle lease to the promise of revenue sharing for Detroit under former Republican governor John Engler.
“But if you look at what happened to this city on the revenue sharing guarantee, you had Gov. Engler promising to protect the city on revenue sharing cuts and three years later the city ends up getting screwed,” Duggan said. “I looked at the Belle Isle lease. There were a lot of promises and none of them were in the lease.”
Duggan believes that the city should create a fee to get on Belle Isle.
“I think the fee ought to be levied by the city council, collected by the city and every dollar spent on that island improve the island. There was no guarantee in what we were getting in exchange for the lease.”
E-mail bthompson@michronicle.com.