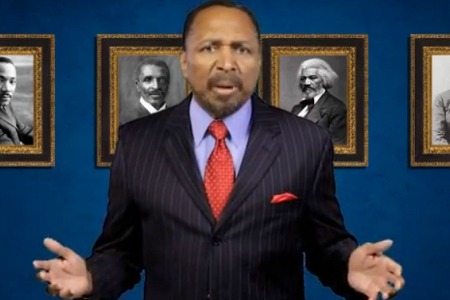 Virginia Republican E.W. Jackson secured the nomination to run for Lt. Governor on Saturday, and, today RawStory.com unearthed a YouTube video in which he says that Planned Parenthood is more “lethal” to the Black community than the KKK, civil rights leaders are guilty of genocide and Christians must decide if they want to follow Jesus or be in the Democratic Party.
Read more from Raw Story:
E.W. Jackson, a pastor and Harvard graduate who previous sought Virginia’s senate seat, is the party’s first African-American candidate for statewide office since the 1980s. He’s also part of a trio of fringe conservatives leading the Virginia Republican Party’s statewide ticket, joined by state Attorney General Ken Cuccinelli running for governor and state Sen. Mark Obenshain running for attorney general.
“The Democrat Party has created an unholy alliance between certain so-called civil rights leaders and Planned Parenthood, which has killed unborn black babies by the tens of millions,” he said in a video published to his official YouTube page. “Planned Parenthood has been far more lethal to black lives than the KKK ever was.
“They can keep their homosexuality private,” he said. “You and I cannot hide being black. I need not recount to you the painful history of slavery, Jim Crow, lynchings and sterilizations, all because of skin color. Anyone who dares equate the so-called gay rights movement to the history of black Americans is exploiting the black community.”