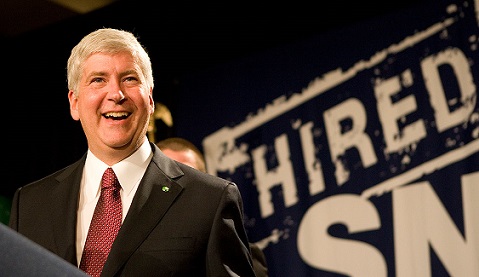 Gov. Rick Snyder isn’t that concerned right now about his re-election prospects. At least that is what the governor wants people to believe even as Democrats scramble to look for a suitable and stately candidate who can stake a claim on the state’s highest office.

During an interview with the Michigan Chronicle preceding the 2013 Mackinac Policy Conference, Snyder said returning to Lansing as chief executive officer in 2014 is not something he’s focused on for the moment.

Instead, the state’s top Republican said he wants to continue to make changes that he feels are necessary to move Michigan forward, including a recent school tour in Detroit with U.S. Education Secretary Arne Duncan.

“That’s not my primary concern. It’s an honor being governor. I haven’t announced I’m running again but as a practical matter I’m just focused on being a good governor and doing the right thing,” Snyder said in response to whether he is concerned about his own re-election prospects as labor activists marshal resources against him in 2014 because of the passage of right-to-work law.

“And that’s the way I’ve done from day one. We had to take on some tough issues, issues that have been around for a very long time and I think we’ve taken those on. We’ve had to ask for sacrifices, but Michigan is really turning around and we are focused on Detroit being a great city.”

The governor said while the annual Mackinac Policy Conference on Mackinac Island organized by the Detroit Regional Chamber has been a success, it should continue to build a bridge between the west side of the state (Grand Rapids) and Southeast Michigan.

“They’ve done a very good job of helping bring people in the Detroit area together but also helping bring in a wider role for Michiganders together in terms of a vision,” Snyder said.

“I think there’s been a lot of improvements over the last two or three years. That’s one of the positives of the Mackinac conference. The Detroit Regional Chamber has been very proactive if you look at the attendance from West Michigan, which is significant. I’ve had real state developers from Grand Rapids say they love what’s going on in Detroit and we’ve had delegations from Detroit look at what’s going on in Grand Rapids.”

Snyder said the synergy is good for the region because “that’s how you solve problems, by getting people talking, helping one another and learning from one another. We’ve made a huge amount of progress.”

Democrats pounced on the governor recently when it was revealed that the newly created Education Achievement Authority of Michigan took a $6 million loan from the struggling Detroit Public Schools, which some education activists say was plain wrong.

Snyder dismissed the criticism from Democratic lawmakers in Lansing as overblown.

“EAA started from scratch. It came out of DPS. I thought it was great that DPS was cooperating, working with them and making sure they get a successful start to the school year and that they get a cash flow borrowing and those borrowing are being paid with interest,” Snyder said.

On the Mackinac conference, Snyder said he wants to see the education and business sectors work more closely together on programs such as early childhood education, where kids can start learning at a very early age, and other initiatives that would make Michigan a 21st century global marketplace.

“I think that ties really well into the talent initiative. We are a place that make things. We should be selling our goods and services all over the world,” Snyder said.

On Detroit’s financial crisis and Emergency Manager Kevyn Orr, Snyder said, “I think things are going reasonably well. I think both in terms of Kevyn and the work he’s been doing, he’s moving things forward. We’ve had a good relationship with the mayor and the city council. I think the community in general seems to be fairly supportive of seeing better services in the city.”