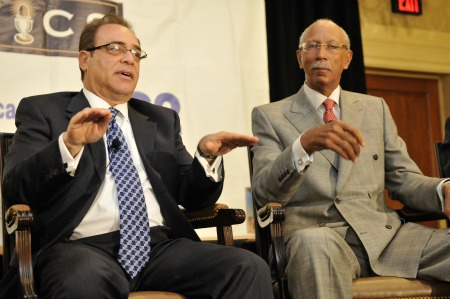 Detroit Mayor Dave Bing and Wayne County Executive Robert Ficano announced today that the United States Environmental Protection Agency (EPA) has awarded the Wayne County Brownfield Redevelopment Authority a 2013 Brownfields Assessment Grant of $600,000. The grant will pay for approximately 32 brownfield environmental site assessments (ESA) in the city of Detroit. These brownfield sites have been impacted by contaminants from
commercial or industrial uses, but have redevelopment potential after cleanup. The EPA’s Brownfield Assessment Grant was awarded in response to a joint proposal submitted by the City of Detroit’s Building, Safety Engineering and Environmental Department (BSEED); Wayne County; and the Detroit / Wayne County Port Authority.

“This grant is the first step toward reclaiming land that has been overused and neglected,” Mayor
Bing said. “Once brownfields are properly assessed, they can be cleaned up and redeveloped as
part of a neighborhood’s revival.”

“I’m very happy the EPA has recognized the outstanding work of the Wayne County Brownfield
Redevelopment Authority,” said Wayne County Executive Ficano. “The grant will assist in the
cleanup and revitalization of Southwest Detroit brownfield sites as well as the revitalization of
the local economy, turning properties into potentially usable, profitable assets.” Wayne County
was awarded a similar $400,000 assessments grant in 2007.

“This grant award is the perfect example of what intergovernmental collaboration can produce
for the City of Detroit and the surrounding region,” said John Jamian, Executive Director of the
Detroit / Wayne County Port Authority. “The DWCPA has enjoyed a great relationship with the
EPA since 2004 and we are excited that this latest grant will allow us to work with our partners
at the City and County to help promote the kind of growth and new investment our communities
need.”

All of the brownfield sites identified for assessment are in Southwest Detroit, the site of significant industrial development in past decades. The grant makes $450,000 available for 19 hazardous substance-related ESAs and $150,000 for 13 petroleum-related ESAs. A portion of the funds will be used for community outreach activities.
The three-agency coalition’s grant proposal identified brownfield sites such as the following for
evaluation: 5800 Michigan Ave. – a one-acre lot with an abandoned industrial building that has been
identified by Southwest Housing Solutions for expansion of a day care center. 9400 McGraw – the former site of an automaker and a glass plating company that sits on 39 acres. Streamco has identified the site for potential expansion and job creation.

The ESAs will be conducted by environmental consulting companies that will be contracted and managed by the coalition of grant partners. The consultants have not yet been determined. Assessment work is expected to begin this fall and is required by the EPA to be completed
within a three-year period. The ESAs will determine existing health and safety risks to communities that surround each brownfield site, as well as costs of cleaning up the sites. The Brownfield Assessment Grant does
not pay for site cleanup or redevelopment.