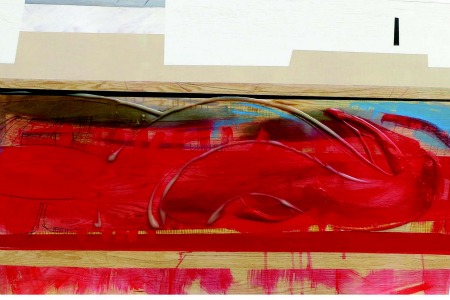 Like all masterful existentialists, the multi-disciplined, Simone DeSousa’s paintings tread the fine line between reality and emptiness, or in this case the abstraction of reality into many interpretations.

Simone DeSousa layers deconstruction of architectural elements with the spontaneity and color sensibility inherent to her Brazilian heritage to build a unique language that is essentially abstract but infused with elements that suggest representational imagery.

DeSousa has exhibited extensively in the Detroit area, as well as in other parts of the country, including New York and San Francisco. Her work is part of private and corporate collections, including the University of Michigan, Compuware, BonSecours Hospital, and Precision Capital, in New York.

In her professional life, she has bridged the fields of art and design, working as a designer and art director. She is co-founder with sculptor Coley McLean of the Salt-Mine Studio, a multidisciplinary studio occupying 4,000 sq. ft. at the Russell Industrial Center, in Detroit, where she has had her painting studio practice since 1998. She is also the founder and director of Re:View Contemporary, a gallery and art project in Midtown Detroit.

DeSousa, named one of ten “Visionaries Of Detroit” in Fortune magazine in 2010, has a bachelor’s degree in architecture and urbanism from the University of Brasilia, Brazil. In an expressionist way DeSousa indeed “constructs” her canvases imagery and texture to seamlessly fit into the physical environment while stimulating the subconscious for a deeper experience.

One of the major revolutionary aspects of the original abstract art movement is that it was the first time in art history that nature wasn’t being represented in some way. A purely emotional and psychological expression that depicted thought —not the temporal world into pure painting, color and textures. DeSousa succeeds, however, in drawing us somewhere between nature and abstraction with these new works. She sees these works as an investigation into the nature of reality, not just the reality of nature. “Through the sheer materiality of the works- all my paintings are on wood, I try to offer a contrasting experience to our current digital visual world,” says DeSousa. “A Myriad of One” is DeSousa’s first solo show after five years of exhibiting and promoting a local “who’s who” of Detroit artists, including Adam Shirley, Mark Dancey, Cedric Tai, Graem Whyte, and the famedPunk Chanteuse and painter, Niagara.

Re:View Contemporary Gallery is located at 444 W. Willis Street in Detroit (at the Willys Overland Lofts, between Cass and Second). The telephone number is 313.833.9000. The Web address is www.reviewcontemporary.com.