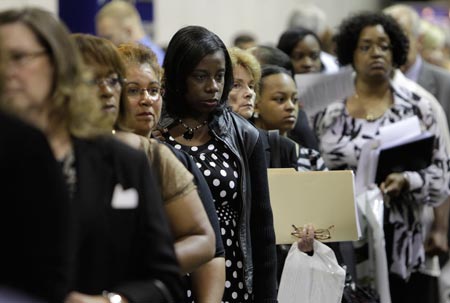 Michigan workers were hit hard by the Great Recession but the state’s African American workers continue to suffer a far higher unemployment rate, a new Economic Policy Institute Issue Brief finds, with Michigan’s black unemployment rate the highest among the 24 states where it can be measured.

“This is an alarming trend that highlights the growing inequity in our state,’’ said Michigan League for Public Policy President & CEO Gilda Z. Jacobs. “For Michigan to recover from the very long recession we’ve suffered, we need an economy that works for all. Policymakers must address this tremendous disparity.’’

“Until our state recovers, the Michigan Legislature needs to restore the traditional period of unemployment benefits back to 26 weeks,’’ Jacobs said.

Another reason for Michigan’s high black unemployment rate is that in the Detroit area many of the available jobs are in suburbs that are inaccessible by public transportation to Detroit residents. Michigan needs to continue to develop a regional public transportation system in Southeast Michigan that can help connect workers with jobs.

The report also finds that Michigan’s white workers suffered during the recession with nearly three straight years (from the first quarter of 2009 through the third quarter of 2011) on unemployment at 9 percent or higher. Only Nevada had a longer stretch of white unemployment over 9 percent.

The report concludes that Michigan’s recovery, spurred by the successful bailout of the auto industry, has been impressive, yet one in five black workers remain unemployed.

“Michigan’s economy has been down a rough road for everybody,’’ said Doug Hall, the report’s coauthor, “but what this study shows is that far more black workers have been left on the side of the highway.’’