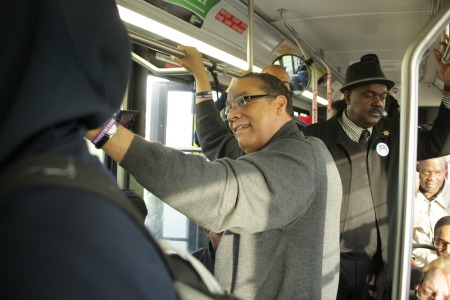 It was just before dawn as Benny Napoleon stepped onto the Grand River Avenue bus near Seven Mile last week, when memories of his late father came to mind. He was 10-years-old when his dad taught him how to catch a bus alone from their home on the westside to his grandparent’s house on the eastside.

“By the time I was in high school, I was riding the bus downtown everyday to my first job at Sibley Shoes,” said Napoleon. “However, I doubt my dad would have allowed me that kind of autonomy at age 10 in times like these where I could have waited at a bus stop for hours, caught in limbo with no streetlights and tensions high because other riders are angry the bus is late.”

But on this day, Benny is 53-years-old and the leading candidate for mayor of the city of Detroit and using this opportunity to talk to a busload of the 106,000 Detroiters who struggle to rely on an inefficient and unreliable bus system to get to school, work, and other important appointments everyday.

Just a few days before, the SEMCOG voted 22-9 to strip $7 million from the already struggling Detroit Department of Transportation (DDOT) and its 106,000 riders in the city – and transfer those funds to support the 35,000 bus riders in the suburbs. The vote was to change the federal transit funding formula from the 65% allocation that DDOT has received for decades, to a 48% allocation.

“Funding should be focused on improving service for the majority of citizens who utilize the bus system,” Napoleon said.

Napoleon has a unique understanding of how inefficiencies harm not only bus riders, but also how they put bus drivers in harms way, as late and no-show buses anger some riders who have their livelihoods tied to the bus line. His sister Alicia was a bus driver for more than 40 years. Like most bus drivers, she loved her job and considered it an important service to the public.

“I believe that public transportation is key to transforming this city; not only through buses, but through light rail and bus rapid transit,” Napoleon said. “As mayor, I will make sure that we are investing in reliable and cost-effective public transportation, and we fight to ensure that the resources are there to sustain a reliable system.”

Nearly an hour later, Napoleon and bus 1235 pulled into the Rosa Parks Transit Center downtown where he was met by Henry Gaffney, president of the bus drivers union – Amalgamated Transit Union Local 26. The ATU is the largest labor union representing transit and allied workers in the U.S. and Canada. Together, they walked across the street where other bus drivers assembled to endorse Napoleon in his candidacy for Mayor of Detroit.

The group emphasized the critical role public transportation plays in a city where more than 30 percent of its residents are without reliable transportation. They were all in agreement that regional transit is vital to a strong Detroit and region, but not at the cost of Detroit citizens who currently rely on DDOT bus service.

“Benny understands how much we value serving this community and is committed to keeping our drivers safe and to ensuring that we are equipped with a reliable fleet to get our residents safely to their destinations on time,” Gaffney said. “We take pride in the role we play for our riders on a daily basis, and when leaders don’t place a priority on efficient operations for DDOT, it angers the public and ultimately puts our drivers at risk – and Benny gets that.”

Napoleon launched his mayoral campaign on March 26 at the Masonic Temple, which was the largest gathering of any political event in Detroit’s history. More than 2,000 residents, members of clergy, labor union members, public safety officials, and business leaders joined Napoleon in his announcement